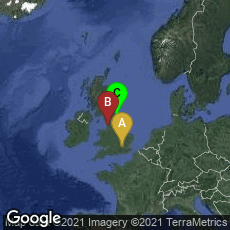 The first draft of the Domesday Book was completed in August 1086 and contained records for 13,418 settlements in the English counties south of the rivers Ribble and Tees (the border with Scotland at the time). William commissioned the book to assess the extent of the land owned in England, and the extent of the taxes he could raise. The information collected was recorded in two huge books in around one year, but William died in 1087 before the Domeday Book was completed. It is preserved in The National Archives of Britain in Richmond, Greater London.

The work was called the Domesday Book because:

"It was written by an observer of the survey that 'there was no single hide nor a yard of land, nor indeed one ox nor one cow nor one pig which was left out.' The grand and comprehensive scale on which the Domesday survey took place, and the irreversible nature of the information collected led people to compare it to the Last Judgement, or 'Doomsday', described in the Bible, when the deeds of Christians written in the Book of Life were to be placed before God for judgment. This name was not adopted until the late 12th Century."