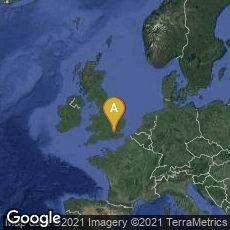 Entrance of the Public Record Office on Chancery Lane, London. This building is now the Maughan Library, King's College London.

The British Parliament established the Public Record Office (PRO) in 1838 to reform the keeping of government archives and court records.

"Up till this time the records were being held, sometimes in poor conditions, in a variety of places."Some of these were court or departmental archives (established for several centuries) which were well run and had good or adequate catalogues; others were little more than store-rooms. Many of the professional staff of these individual archives simply continued their existing work in the new institution. A good number of documents were transferred from the Tower of London and the chapter house of Westminster Abbey, though the Domesday Book was not moved from Westminster until the 1850s, when proper storage had been prepared.

"The PRO was placed under the control of the Master of the Rolls, a senior judge whose job had originally included responsibility for keeping the records of the Chancery Court, and was originally located in the mediaeval Rolls Chapel (the former Domus Conversorum), a sort of halfway house for Jews who converted to Christianity, on Chancery Lane at the boundary of the City of London with Westminster. The first Master of the Rolls to take on this responsibility was Lord Langdale, while his Deputy Keeper, the historian Sir Francis Palgrave, had full-time responsibility for running the Office.

"There was no right to consult the records freely for scholarly purposes until 1852, despite the 1838 Public Record Office Act's intention of enabling public access. Fees were paid by lawyers who used the archives to consult a limited number of documents. These charges were abolished for serious historical and literary researchers after a petition was signed in 1851 by 83 people including Dickens, Macaulay, and Carlyle.

"A purpose built archive was designed and built between 1851 and 1858 (architect: Sir James Pennethorne) and extended onto the site of the Rolls Chapel, which was demolished as it was structurally unsound, between 1895 and 1902. Public search rooms were opened in 1866, but greater access led the authorities to restrict certain classes of document, and to favour visitors who were experienced in dealing with historical material.

"The growing size of the archives held by the PRO and by government departments led to the Public Records Act 1958, which established standard procedures for the selection of documents of historical importance to be kept by the PRO. Even so, growing interest in the records produced a need for the Office to expand, and a second building was opened at Kew in south-west London in 1977. The Kew building was expanded in the 1990s and all records were transferred from Chancery Lane to Kew or the Family Records Centre in Islington by 1997. The Chancery Lane building is now known as the Maughan Library, the largest library of King's College London" (Wikipedia article on Public Record Office, accessed 07-11-2009).