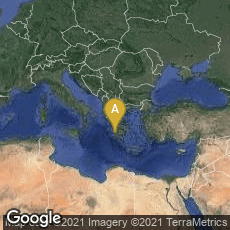 Artist's representation of Olympia in ancient Greece from Pierers Universal-Lexikon, 1891.

According to ancient Greek records, which also represent the adoption in Greece of the Phoenician alphabet, from which all other Western alphabets are descended, the first Olympic games took place in 776 BCE. The date is based on inscriptions, found at Olympia, of the winners of a foot race held every four years, starting in 776 BCE.