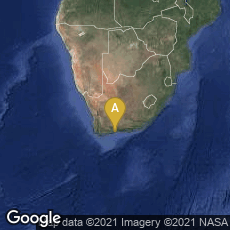 Kyle S. Brown, a doctoral student at the University of Cape Town, and colleagues published "Fire as an Engineering Tool of Early Modern Humans," Science, 14 August 2009: 325, 859-62.

"The controlled use of fire was a breakthrough adaptation in human evolution. It first provided heat and light and later allowed the physical properties of materials to be manipulated for the production of ceramics and metals. The analysis of tools at multiple sites shows that the source stone materials were systematically manipulated with fire to improve their flaking properties. Heat treatment predominates among silcrete tools at ~72 thousand years ago (ka) and appears as early as 164 ka at Pinnacle Point, on the south coast of South Africa. Heat treatment demands a sophisticated knowledge of fire and an elevated cognitive ability and appears at roughly the same time as widespread evidence for symbolic behavior" (Science).

Brown et al report finding stone tools that show signs of being heated to about 600 degrees Fahrenheit. Heat-treating, most likely by burying a stone under a fire, made a stone easier to knap, or shape into a tool by striking it with another stone.

"Archaeologists were studying several sites on the South African coast, with artifacts dating from 72,000 to 164,000 years ago that would have been made by modern humans from the African Middle Stone Age. Mr. Brown, an archaeological knapper who tries to replicate ancient tools, said they noticed that blades found at the site, made from a stone called silcrete, did not match silcrete obtained from outcroppings in the area. 'We realized we were missing something,' he said.

"They experimented by heat-treating some of the stone themselves. 'When we pulled it out of the fire and flaked it, it did look like the kind of stone we were finding at our site,' Mr. Brown said. Their findings are published in Science.

"The researchers had to show that the tools they found were intentionally heated to improve workability, not accidentally through a bushfire or other means. They found tools in areas where there was no evidence of burning. And they conducted tests on some of the artifacts, including one that showed that flaked surfaces had a glossiness that occurs only when the stone has been heated, proving that the stones were heated first and then worked into tools" (http://www.nytimes.com/2009/08/18/science/18obfire.html?_r=1&hpw).

♦ "The find also adds weight to the argument that modern humans were acting in sophisticated ways long before they came to Europe about 35,000 years ago--and that they were engaged in far more complex behavior than were the Neandertals who lived at the same time, says anthropologist Alison Brooks of George Washington University in Washington, D.C. 'This is another piece of evidence that modern humans had made a lot of discoveries that Neandertals had not' "(http://sciencenow.sciencemag.org/cgi/content/full/2009/813/1).