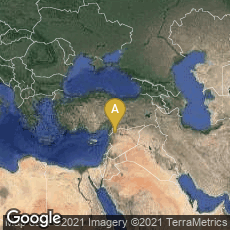 "The earliest reference in the Mediterranean world to the Indian system of numeration [Arabic numerals] dated from the mid-seventh century, just after the rise of Islam. In a fragment, dated 662, of a work by Severus Sebokht, the learned bishop of the monastery of Quinnasrin (located on the Euphrates in Syria [25 km southwest of Aleppo]), the bishop expresses his admiration for the Indians because of their valuable method of computation 'done by means of nine signs.' Severus had probably learned about the system from Eastern merchants active in Syria. This ingenious and eminently simple system of representing any quantity by using nine symbols in decimal place value (there was orignally no zero) arose in India perhaps as early as the fifth century. The indian system seems to have been known in Baghdad as early as 770, or less than a decade after its founding, but it was principally diffused through the writings of the Abbasid mathematician and geographer Muhmmad ibn Musa al-Khwarizmi (al-Khwarazmi) who died around 846" (Bloom, Paper Before Print. The History and Impact of Paper on the Islamic World [2001] 129).

From page 48 of A History of Mathematical Notations, by Florian Cajori (1993) we learn that the specific fragment recording this detail is Bibliothèque nationale de France (MS Syriac [Paris], No. 346).

"Ms. Paris Syriaque 346
This manuscript contains a large quantity of works by Severus Sebokht, and is the main source for his works. [4]
The Syriac manuscripts 1-288 are described by Herman Zotenberg in his Catalogue des manuscrits syriaques et sabéens (mandaïtes) de la bibliothèque nationale, Paris (1874), which was completed for mss. 289-334 by J-B. Chabot. The following manuscripts are described in a handwritten supplement to Chabot's catalogue, which can only be consulted in the "Salle Orientale" (Oriental reading room) at the Bibliotheque Nationale.
Ms. Syr. 346 has a relatively detailed description at the head of the volume, probably by Chabot, on the first guard-leaf. It contains 177 f. The first 36 folios are missing. It is written in a fine Serto hand. Each page has 28 lines, and is 160 x 120 mm.
It contains a collection of various treatises on astronomy, most of them by Severus Sebokht of Nisibis. Here is a list of contents. (The attributions are elderly and perhaps need revisiting).
The very brief notice in the catalogue mentions the existence of 13 ff. detached from this manuscript and forming ms. Syriac 392. Laurent Héricher adds that apparently only the first 8 folios can be from ms. Syriaque 346. The folios are very damaged and practically illegible. They have been folded in half.
The manuscript was brought to France by Addai Scher. [5] "