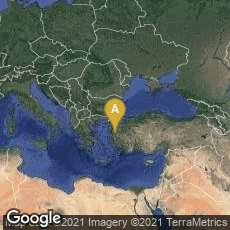 Modern statue of Galen in his home town of Pergamon (Bergama, Turkey). This is how the modern sculptor imagined Galen might have looked. We have no evidence regarding Galen's physical appearance.

"The De libris propriis liber opens with a general introduction, in which Galen refers to the books falsely attributed to him. The main text is dvided into seventeen chapters, in which Galen arranges his works under such headings as commentaries, anatomical works, Hippocratic writings, works on moral philosophy, grammar and rhetoric, and so on. This bibliography apparently did not suffice as a guide to the five hundred or so works Galen had put out (many of them now lost), for he added a second one. This is the De ordine librorum suorum liber, of which second bibliography unfortunately only a fragment has come down to us" (Besterman, The Beginnings of Systematic Bibliography 2nd ed (1940) 3, nos. I & II).

Galen's bibliographies were first published in print in Part IV, ff.**1-6, of the editio princeps of his collected writings in Greek issued by the heirs of Aldus Manutius and Aldus's father-in-law, Andreas Asulanus, in Venice in 1525. They were revised and improved by Conrad Gessner for an edition published in Basel in 1562.

Breslauer & Folter, Bibliography: Its History and Development (1984) no. 2.