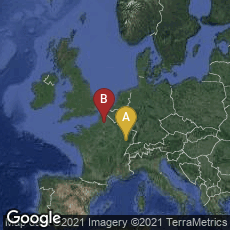 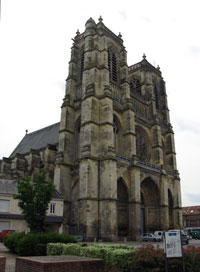 Balthild, widow of Clovis II, and her son Clotaire III, founded Corbie Abbey about 659-661. The first monks at Corbie came from Luxeuil Abbey, which had been founded by Saint Columbanus in 590, and the Irish respect for classical learning fostered at Luxeuil was carried forward at Corbie. The rule of these founders was based on the Benedictine rule, as modified by Columbanus.

"Above all, Corbie was renowned for its library, which was assembled from as far as Italy, and for its scriptorium. In addition to its patristic writings, it is recognized as an important center for the transmission of the works of Antiquity to the Middle Ages. An inventory (of perhaps the 11th century) lists the church history of Hegesippus, now lost, among other extraordinary treasures. In the scriptorium at Corbie the clear and legible hand known as Carolingian minuscule was developed, in about 780, as well as a distinctive style of illumination.

"Three of Corbie's ninth-century scholars were Ratramnus (died ca. 868), Radbertus Paschasius (died 865) and the shadowy figure of Hadoard. Jean Mabillon, the father of paleography, had been a monk at Corbie.

"Among students of Tertullian, the library is of interest as it contained a number of unique copies of Tertullian's works, the so-called corpus Corbiense and included some of his unorthodox Montanist treatises, as well as two works by Novatian issued pseudepigraphically under Tertullian's name. The origin of this group of non-orthodox texts has not satisfactorily been identified.

"Among students of medieval architecture and engineering, such as are preserved in the notebooks of Villard de Honnecourt, Corbie is of interest as the center of renewed interest in geometry and surveying techniques, both theoretical and practical, as they had been transmitted from Euclid through the Geometria of Boëthius and works by Cassiodorus (Zenner).

"In 1638, 400 manuscripts were transferred to the library of the monastery of St. Germain des Prés in Paris. In the French Revolution, the library was closed and the last of the monks dispersed: 300 manuscripts still at Corbie were moved to Amiens, 15 km to the west. Those at St-Germain des Prés were loosed on the market, and many rare manuscripts were obtained by a Russian diplomat, Petrus Dubrowsky [Peter Petrovich Dubrovsky] and sent to St. Petersburg. Other Corbie manuscripts are at the Bibliothèque Nationale. Over two hundred manuscripts from the great library at Corbie are known to survive" (Wikipedia article on Corbie Abbey, accessed 08-20-2009).