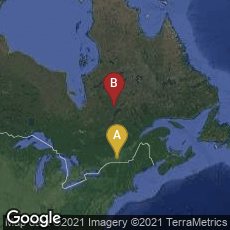 Discovery of Unknown Portrait by Leonardo Confirmed by a Fingerprint "The ghost of a fingerprint in the top left corner of an obscure portrait appears to have confirmed one of the most extraordinary art discoveries. The 33 x 23cm (13 x 9in) picture, in chalk, pen and ink, appeared at auction at Christie’s, New York, in 1998, catalogued as 'German school, early 19th century'. It sold for $19,000 (£11,400). Now a growing number of leading art experts agree that it is almost certainly by Leonardo da Vinci and worth about £100 million.

"Carbon dating and infra-red analysis of the artist’s technique are consistent with such a conclusion, but the most compelling evidence is that fragment of a fingerprint.

"Mr Biro has pioneered the use of fingerprint technology to help to resolve art authentication disputes. Multispectral analysis reveals each layer of colour, and enables the pigment mixtures of each pixel to be identified without taking physical samples. The fingerprint corresponds to the tip of the index or middle finger, and is 'highly comparable' to one on Leonardo’s St Jerome in the Vatican. Importantly, St Jerome is an early work from a time when Leonardo was not known to have employed assistants, making it likely that it is his fingerprint.

"Martin Kemp, Emeritus Professor of History of Art at the University of Oxford, is convinced and recently completed a book about the find (as yet unpublished). He said that his first reaction was that 'it sounded too good to be true — after 40 years in the business, I thought I’d seen it all'. But gradually, “all the bits fell into place.”

Professor Kemp has rechristened the picture, sold as Young Girl in Profile in Renaissance Dress, as La Bella Principessa after identifying her, 'by a process of elimination', as Bianca Sforza, daughter of Ludovico Sforza, Duke of Milan (1452-1508), and his mistress Bernardina de Corradis. He described the profile as 'subtle to an inexpressible degree', as befits the artist best known for the Mona Lisa.

"If it is by Leonardo, it would be the only known work by the artist on vellum although Professor Kemp points out that Leonardo asked the French court painter Jean Perréal about the technique of using coloured chalks on vellum in 1494.

"The picture was bought in 1998 by Kate Ganz, a New York dealer, who sold it for about the same sum to the Canadian-born Europe-based connoisseur Peter Silverman in 2007. Ms Ganz had suggested that the portrait 'may have been made by a German artist studying in Italy ... based on paintings by Leonardo da Vinci'.

"When Mr Silverman first saw it, in a drawer, 'my heart started to beat a million times a minute,' he said. 'I immediately thought this could be a Florentine artist. The idea of Leonardo came to me in a flash.'

"Carbon-14 analysis of the vellum gave a date range of 1440-1650. Infra-red analysis revealed stylistic parallels to Leonardo’s other works, including a palm print in the chalk on the sitter’s neck 'consistent ... to Leonardo’s use of his hands in creating texture and shading', according to Mr Biro" (http://entertainment.timesonline.co.uk/tol/arts_and_entertainment/visual_arts/article6872019.ece, accessed 10-14-2009).

♦Another very useful report on this discovery appeared in Antiques Trade Gazette on October 12, 2009.

♦An interview with Peter Silverman about the purchase appeared in Antiques Trade Gazette on October 26, 2009.