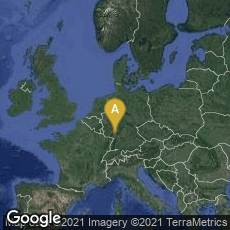 The Emperor Charles V, painted by Bernard van Orley between 1515 and 1516, in the Museum of Fine Arts, Budapest.

"Item. We ask you and command that 'with the sounding of the trumpet' you call the people from the four corners of the villages and cities where this edict will be published and gather them where it is customary to publish our edicts and mandates. You will then read this edict word for word and with a loud voice. We order, upon the penalties contained herein, that the contents of this edict be kept and observed in their entirety; and we forbid anyone, regardless of his authority or privilege, to dare to buy, sell, keep, read, write, or have somebody write, print or have printed, or affirm or defend the books, writings, or opinions of the said Martin Luther, or anything contained in these books and writings, whether in German, Latin, Flemish, or any other language. This applies also to all those writings condemned by our Holy Father the pope and to any other book written by Luther or any of his disciples, in whatever manner, even if there is Catholic doctrine mixed in to deceive the common people.

"For this reason we want all of Luther's books to be universally prohibited and forbidden, and we also want them to be burned. We execute the sentence of the Holy Apostolic See, and we follow the very praiseworthy ordinance and custom of the good Christians of old who had the books of heretics like the Arians, Priscillians, Nestorians, Eutychians, and others burned and annihilated, even everything that was contained in these books, whether good or bad. This is well done, since if we are not allowed to eat meat containing just one drop of poison because of the danger of bodily infection, then we surely should leave out every doctrine (even if it is good) which has in it the poison of heresy and error, which infects and corrupts and destroys under the cover of charity everything that is good, to the great peril of the soul.

"Therefore, we ask you who are in charge of judicial administration to have all of Luther's books and writings burned and destroyed in public, whether these writings are in German, Flemish, Latin, or in any other written language and whether they are written by himself, his disciples, or the imitators of his false and heretical doctrines, which are the source of all perversity and iniquity. Moreover, we ask you to help and assist the messengers of our Holy Pope. In their absence you will have all those books publicly burned and execute all the things mentioned above.

"To that effect, we ask and require all our subjects of your jurisdiction to consider the penalties herein mentioned, and we also ask them to assist and obey you as they would obey us.

"We also have to be careful that the books or the doctrines of the said Martin Luther not be written and published under other authors' names. Daily, several books full of evil doctrine and bad examples are being written and published. There are also many pictures and illustrations circulated so that the enemy of human nature, through various tricks, might capture the souls of Christians. Because of these books and unreasonable pictures, Christians fall into transgression and start doubting their own faith and customs, thus causing scandals and hatreds. From day to day, and more and more, rebellions, divisions, and dissensions are taking place in this kingdom and in all the provinces and cities of Christendom. This is much to be feared.

"For this reason, and to kill this mortal pestilence, we ask and require that no one dare to compose, write, print, paint, sell, buy, or have printed, written, sold, or painted, from now on in whatever manner such pernicious articles so much against the holy orthodox faith and against that which the Catholic Apostolic Church has kept and observed to this day. We likewise condemn anything that speaks against the Holy Father, against the prelates of the church, and against the secular princes, the general schools and their faculties, and all other honest people, whether in positions of authority or not. And in the same manner we condemn everything that is contrary to the good moral character of the people, to the Holy Roman Church, and to the Christian public good.

"And finally, after this edict has been published, we want all the books, writings, and pictures mentioned above to be publicly burned, including those under the name of any author that might be printed, written, or compiled in any language, wherever they may be found in our countries.

We ask you to be diligent in apprehending and confiscating all the belongings of those who seem rebellious to the ordinances herein mentioned and to punish them according to the penalties set out by law-Divine, canon, and civil.

"And so as to prevent poisonous false doctrines and bad examples from being spread all over Christendom, and so that the art of printing books might be used only toward good ends, we, after mature and long deliberation, order and command you by this edict that henceforth, under penalty of confiscation of goods and property, no book dealer, printer, or anybody else mention the Holy Scriptures or their interpretation without having first received the consent of the clerk of the city and the advice and consent of the faculty of theology of the university, which will approve those books and writings with their seal. As for books that do not even mention faith or the Holy Scriptures, we also want this decree applied to them, except that our consent or that of our lieutenants will be sufficient. All this will apply for the first printing of the books hereabove mentioned.

"Item. Furthermore, we declare in this ordinance that if anyone, whatever his social status may be, dares directly or indirectly to oppose this decree--whether concerning Luther's matter, his defamatory books or their printings, or whatever has been ordered by us--these transgressors in so doing will be guilty of the crime of lèse majesté and will incur our grave indignation as well as each of the punishments mentioned above.

"We desire that evidence be added to the copy of this decree, signed by one of our secretaries or by an apostolic notary as would be done for this original.

"As a witness to this, and for all these things to be firm and forever established, we have put our seal on this document and have signed by our hand.

"Given in our city of Worms on the eighth day of May in the year of our Lord one thousand five hundred twenty-one.

In this comprehensive edict Charles V took a position identical to the pope, without any attempt to compromise with Luther or his followers. It has been suggested that the proclamation was part of a bargain by which Charles V attempted to enlist the cooperation of the pope against Francis I of France.

Depending on the influence which Charles V could exert on a specific region, and the attitude of sovereigns toward Luther and other reformers, this imperial decree was enforced with varying degrees of vigor, or not at all.