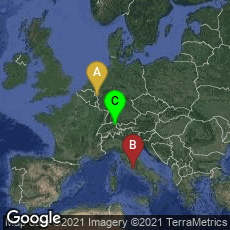 "As a vehicle in which to disseminate its written work the Carolingian court discarded the ligatured, flowing chancery scripts that it had inherited from late Antiquity via the Merovingians in favour of a revived late-patristic half-uncial script, modified to produce the form we call Carolingian minuscule. The speed with which the script was adopted across the empire, between 800 and 830, can only be explained by the smallness of the ruling class of abbots and bishops who were responsible for its propagation. The literature of the past—the bulk of it still, at this date, in manuscripts produced by the Roman book trade—was recopied wholesale in the new script. By the end of the ninth century the Carolingians had produced a remarkable number of manuscripts, over 6,700 of which survive. Unfortunately, every manuscript copied in the legible new script rendered its exemplar superfluous. The movement that insured the survival of ancient literature also entailed the physical destruction of many late Roman manuscripts. Altogether, only some 1,865 Latin manuscripts survive, wholly or in part from all the centuries before AD 800" (Rouse, "The Transmission of the Texts," Jenkyns [ed] The Legacy of Rome: A New Appraisal [1992] 47).