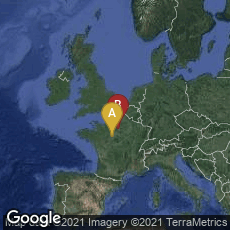 Foundation of the Trésor des Chartes The great seal of Richard I.

At a battle on July 3, 1194 with Richard I of England (Richard Coeur de Lion, Richard the Lion Heart) on the edge of the Fréteval forest (near Vendome) Philip II Augustus (Philippe Auguste) of France suffered a crushing defeat, and lost the treasure and the fiscal records that he carried on his campaigns. As a result of this loss Philippe Auguste was forced to reconstruct his records, and he decided to establish a greffe (registry) for his public acts. He entrusted the project to Gauthier de Nemours, his grand chambellan (grand chamberlain). From 1195 official records were stored in the Trésor des Chartes. After Gauthier's death in 1220 the soldier-monk Guérin (Garin, Guarinus, Garinus) garde des sceaux (Keeper of the Seals) directed the project.

In 1204 Philippe Auguste had the archive moved to the Louvre. At the end of the reign of Louis IX (St. Louis) in 1270 the Trésor des Chartes was moved to a building adjoining the Sainte-Chapelle within easy reach of the advocates of the Le palais de la cité. The archive grew as rapidly as the monarchy itself, and by the fourteenth century there was already a well-established archivist tradition in France.