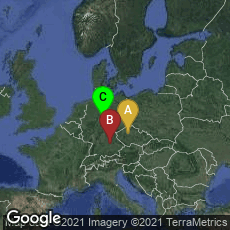 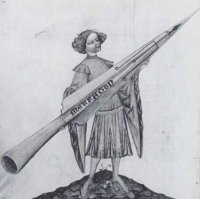 Though he originally conceived the work for King Wenceslaus, Kyeser dedicated the finished book to Rupert III of Germany. Bellifortis summarized material from classical writers on military technology, including Vegetius' De re militari and Frontinus' anecdotal stratagems or Strategemata, emphasizing poliorcetics, or the art of siege warfare, but treating magic as a supplement to the military arts.

"Konrad Kyeser wrote his treatise between 1402 and 1405 when he was exiled from Prague to his hometown of Eichstätt. Many of the illustrations for the book were made by German illuminators who were sent to Eichstatt after their own ousting from the Prague scriptorium. The work, which was not printed until 1967, survived in a single original presentation manuscript on parchment at University of Göttingen, bearing the date 1405, and in numerous copies, excerpts and amplifications, both of the text and of the illustrations, made in German lands" (Wikipedia article on Bellifortis, accessed 10-31-2010).

The catalogue of the Niedersächische Staats- und Universitätsbibliothek Göttingen lists various facsimiles and editions of Bellifortis.

"De re militari", the First Printed Book on Technology with the First Woodcuts on a Scientific or Technological Subject
The Tabula Peutingeriana: the only Roman World Map that Survived from Antiquity
Publius Flavius Vegetius Renatus: The Only Ancient Manual of Roman Military Instructions that Survived Intact
The Importance of Lay Readers and Lay Book Owners by the End of the 14th Century