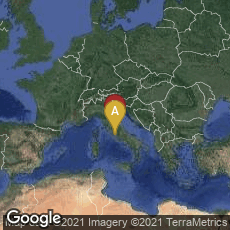 Believing that nature should be studied through direct observation, and not through the filter of Aristotelian philosophy, on August 17, 1603 scientist, naturalist and son of the first Duke of Acquasparta, Federico Cesi, together with Dutch scientist Johannes van Heeck (Eck), and Count Anastasio De Filiis, and Italian scientist and Latin translator, Francesco Stelluti founded the Accademia dei Lincei (the "Academy of the Lynx-Eyed") in Rome.

"The four men chose the name 'Lincei' (lynx) from Giambattista della Porta's book 'Magia Naturalis', which had an illustration of the fabled cat on the cover and the words '. . . with lynx like eyes, examining those things which manifest themselves, so that having observed them, he may zealously use them'. Accademia dei Lincei's symbols were both a lynx and an eagle; animals with keen sight. The academy's motto, chosen by Cesi, was: 'Take care of small things if you want to obtain the greatest results' (minima cura si maxima vis). When Cesi visited Naples, he met the polymath della Porta. Della Porta encouraged Cesi to continue with his endeavours. Giambattista della Porta joined Cesi's academy in 1610.

"Galileo was inducted to the exclusive academy on December 25, 1611, and became its intellectual center. Galileo clearly felt honoured by his association with the academy for he adopted Galileo Galilei Linceo as his signature. The academy published his works and supported him throughout his disputes with the Roman Catholic Church. Among the academy's early publications in the fields of astronomy, physics and botany were the study of sunspots and the famous Saggiatore of Galileo, and the Tesoro Messicano (Mexican Treasury) describing the flora, fauna and drugs of the New World, which took decades of labor, down to 1651. With this publication, the first, most famous phase of the Lincei was concluded. Cesi's own intense activity was cut short by his sudden death in 1630 at forty-five.

"The Linceans produced an important collection of micrographs, or drawings made with the help of the newly invented microscope. After Cesi's death, the Accademia dei Lincei closed and the drawings were collected by Cassiano dal Pozzo, a Roman antiquarian, whose heirs sold them. The majority of the collection was procured by George III of the United Kingdom in 1763. The drawings were discovered in Windsor Castle in 1986 by art historian David Freedberg. They are being published as part of The Paper Museum of Cassiano dal Pozzo" (Wikipedia article on Accademia dei Lincei, accessed 11-27-2010).