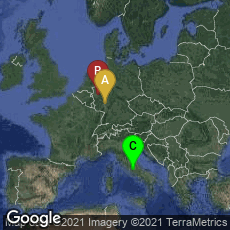 The First Three Printed Editions of Classical Texts, all by Cicero

Detail from page of De officiis with Paradoxa Stoicorum.  Click on the image to see the entire page.

In 1465 Johann Fust and Peter Schöffer issued De officiis with Paradoxa Stoicorum. Hexasticha XII Sapientum de titulo Ciceronis. Horatius Flaccus: Ad T. Manlium Torquatum (Car. IV 7) from Mainz. This edition, and coincidentally two other editions of texts by Cicero also printed in 1465, were the first editions of classical texts issued through the medium of printing. ISTC No.: ic00575000. In November 2013 a digital facsimile was available from the Bayerische Staatsbibliothek at this link.

About 1465 printer Ulrich Zell issued Cicero's De officiis from Cologne. Zell learned printing in Mainz at the shop of Fust and Schöffer, and is thought to have begun printing in Cologne as early as 1463. However, a number of his books are undated, as is this edition of De officiis. If it was issued in 1465 it is one of the three earliest printed editions of a classical text, all of which appeared in 1465. The third edition of a classical text issued in 1465 was the edition of Cicero's De oratore issued at the Abbey of Subiaco, Italy by Sweynheim and Pannartz in September, 1465.