Crypt of the Abbey of St. Victor, Marseille. Photo by Ivan Herman. 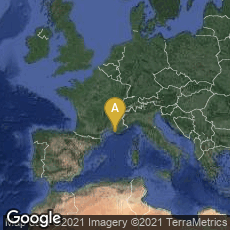 About 415 theologian John Cassian (Latin: Jo(h)annes Eremita Cassianus, Joannus Cassianus, or Joannes Massiliensis, John the Ascetic, or John Cassian the Roman) founded two monasteries of St. Victor near Marseille, then southern Gaul: one for men, another for women.

The monastery for men later became the Abbey of St. Victor.

"While he was in Rome John Cassian accepted the invitation to found an Egyptian-style monastery in southern Gaul, near Marseille. He may also have spent time as a priest in Antioch between 404 and 415. Whatever the case, he arrived in Marseille around 415. His foundation, the Abbey of St Victor, was a complex of monasteries for both men and women, one of the first such institutes in the West, and served as a model for later monastic development. Cassian's abbey and writings influenced St. Benedict, who incorporated many of the same principles into his monastic rule (Rule of St. Benedict), and recommended to his own monks that they read the works of Cassian. Since Benedict's rule is still used by Benedictine, Cistercian, and Trappist monks, the thought of John Cassian still guides the spiritual lives of thousands of men and women in the Western Church" (Wikipedia article on John Cassian, accessed 02-14-2011).

Thanks to Anghel Curty for assisting me with this entry.