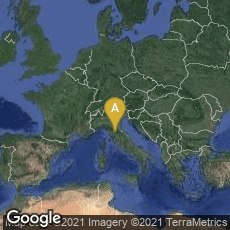 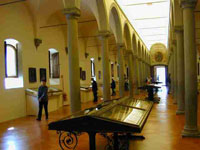 Foundation of the library at the Dominican Convent of San Marco in Florence by Cosimo de' Medici, designed by Michelozzo.

This has often been considered the first "public library" in Renaissance Europe.

"The ideal of a public library was one treasured by humanists and their patrons. Yet the term public library meant something very different to Renaissance scholars than it does today. It did not designate a library open to all comers. First and oldest of the available meanings of the term public library was that of a common library. Many libraries and colleges of the late medieval period had public libraries in this sense, usually meaning a collection for the collective use of the institutional community. Second was the notion of a library that served the public utility or was used for the public benefit, largely in a political sense; an archive, for example, or a library meant to support the jurisdictional and diplomatic activities of the ecclesiastical or secular political body it served. Third, a library might be in a public building or within the public space of a house or palace.

"Perhaps the best early expression of the modern concept of the public library is to be found in the establishment of the San Marco library, the first public library at Florence. The foundation of the library was Niccoli's collection. Niccoli's intentions were for his library to be brought 'to the common good, to the public service, to a place open to all, so that all eager for education might be able to harvest from it as from a fertile field the rich fruit of learning.' Eventually, the executors of Niccoli's estate permitted Cosimo de' Medici to place the books in the library of the Dominican convent of San Marco, which Cosimo was then on the verge of constructing. The library opened in 1444 and was the first public library in Florence, containing 400 volumes laid out across 64 benches. The San Marco library embodied three different Renaissance concepts of a public library: It was the common library of the Dominican convent in which it was housed, a collection made available to a circle of humanist investigators, and an institution supported by the public patronage of an eminent ruler" (P. Nelles, "Renaissance Libraries", Stam, (ed.) International Dictionary of Library History [2001] 151).