Remarkably elegant manuscript title page for the first printed edition of Thucydides presumably created for the copy by its original owner and annotator. Bayerische Staatsbibliothek. 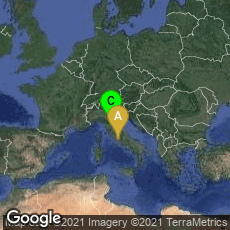 In 1452 Italian priest, humanist, rhetorician and orator Lorenzo Valla finished the first complete Latin translation of Thucydides (Θουκυδίδης, Thoukydídēs) History of the Peloponnesian War. Valla's translation was commissioned by humanist Pope Nicholas V as part of the pope's project–never completed for obvious reasons–to have all Greek literature translated into Latin. Valla began the translation in the spring of 1448, and the difficult task occupied him for two years. The manuscript of the final text, written by the scribe Johannes Lamperti de Rodenberg, with numerous corrections and explanatory notes in Valla's hand, is preserved in the Vatican Library (Vat. lat. 1801). An image of this is published in Grafton, "The Vatican and Its Library," Grafton (ed) Rome Reborn. The Vatican Library and Renaissance Culture (1993) 35. Specifically Valla sanctioned this manuscript as the archetypus, the standard text from which he expected the text to be diffused through copying.

In his dedication of the manuscript to the pope Valla compared "Pope Nicholas V to a Roman emperor who, while he himself remained in Rome, bade his generals conquer foreign lands and add them to the Empire, i.e., translate their literature into Latin. . . . Valla's province, Thucydides, had proved especially arduous. Valla also mentioned in the dedication that it was Bessarion who suggested to the pope that he commission the Latin Thucydides from Valla" (Pade, "Thucydides," Brown, Hankins, Kaster [eds] Catalogus translationum et commentariorum VIII [2003] 120).

Valla's translation was widely copied, and in the process corrupted. When Valla's text of Thucydides was first printed, probably in Treviso by Joannes Rubeus Vercellensis in 1483, the editor, Bartholomaeus Parthenius, stated that the copy or copies of Valla's translation to which he had access were so corrupt that he had to refer to a Greek manuscript to determine the correct text. Nevertheless Parthenius's printed text was also widely criticized by later scholars. Remarkably, Parthenius's edition was the only printed edition of Thucydides issued in the 15th century.(ISTC no. it00359000) In November 2013 a digital facsimile of the first printed edition was available from the Bayerische Staatsbibliothek at this link.

The Greek text or texts from which Valla worked do not seem to have been identified. During the Middle Ages in Europe, in which there was limited knowledge of Greek and Greek texts generally, Thucydides was known in the West only through mentions in the Latin writings of ancient Rome. The earliest surviving translation of Thucydides is a translation into Aragonese of thirty-eight speeches from the Historiae made at the request of Juan Fernández de Heredia, Grand Master of Rhodes, who also commissioned Aragonese translations of other classical works. Pade (p. 111) believed that this translation was done from "an intermediary version in demotic Greek compiled for Heredia by the Greek scholar Dimitri Calodiqui between 1384 and 1396."

The earliest surviving Greek text of Thucydides may be the tenth century codex preserved in Florence at the Laurentian Library, Plut. 1xix.