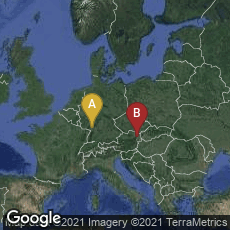 The Codex Spirensis, of which Only a Single Leaf of the Original Survives The Codex Spirensis, an illuminated Carolingian copy written in the middle Rhine area of Germany in the late ninth or early tenth century, of a late antique manuscript, and discovered at the Cathedral Library at Speyer in the fifteenth century, no longer survives except for a single leaf (Thompson 11). Because of the copies made of this codex in the fifteenth century, the codex preserved thirteen different texts, of which perhaps the most significant were the Notitia Dignitatum, Dicuil's De mensura orbis terrae, and the Anonymous, De rebus bellicis.

The four primary copies of the Codex Spirensis are:

(C). The copy made for the bibliophile Pietro Donato, bishop of Padua, in January 1436, while Donato was presiding over the Council of Basel. Now at the Bodleian Library, Oxford. This is Bodleian MS. Canon. Misc. 378, of which a digital facsimile is available from the Bodleian at this link. This is the earliest copy of this text to survive complete.

(V) A copy written in 1484 and first found at Speyer where it was copied in 1529 for Cardinal Bernhard von Cles (Clesius), Archbishop of Trento, who visited the city that year. The manuscript can later be traced to Salzburg, and at the beginning of the nineteenth century to Vienna (Cod. Vindob.lat. 303). As a result of the peace settlement of Europe in 1919 it was transferred from Austria to Italy, and is now at Trento.

In June 2017 Dr. Ingo G. Maier informed me of the extensive research on the single leaf referrred to by Thompson published as:

(M) A copy made in June 1550 for the Elector Palatine of the Rhine Otto Heinrich. This had been offered to the prince instead of the original. In 1552 the prince acquired the original Codex Spirensis, and it remained in his family collection until disappearing mysteriously. It is now preserved at the Munich Staatsbibliothek.

Thompson, A Roman Reformer and Inventor. Being a New Text of the Treatise De Rebus Bellicis with a translation and introduction (1952) 6-12.

Notitia Dignitatum, One of the Few Surviving Sources for the Administrative Structure of the Late Roman Empire
De rebus bellicis, Including Images of War Machines