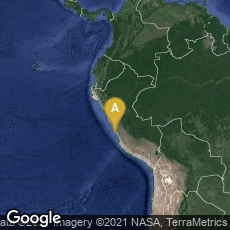 Historia general del Piru, written by the Basque Mercedarian friar and missionary Martín de Murúa, is an early illustrated treatise on the history of Inca and early colonial Peru, surviving in two manuscript copies. Murúa's chronicle, written during his missionary work in Peru, includes a history of Peru before and after its conquest by the Spanish.

The two surviving manuscripts of Murúa's work are the Galvin Murúa, also known as the "Loyola Murúa," sold to John Galvin by antiquarian bookseller Warren Howell of John Howell - Books in San Francisco, and the Getty Murúa, also known as the "Wellington Murúa". The Galvin copy is remains in the Sean Galvin collection in County Meath, Ireland while the Getty example is preserved at the Getty Research Institute in Los Angeles.

"The Galvin Murúa dates from the 1580s and was completed around 1600. This first version of the chronicle was compiled in Peru by Murúa with the assistance of local scribes and Indigenous artists (one of whom was Felipe Guaman Poma de Ayala). By the eighteenth century, the Galvin Murúa ended up in the possession of the Jesuit College in Alcalá de Henares, Spain. Between 1879-1900, the manuscript was housed in a Jesuit enclave in Poyanne, France. Its association with the Jesuits gave the manuscript its title the "Loyola Murúa" (after Saint Ignatius of Loyola, founder of the Jesuit order). . . .

"The Getty Murúa dates from 1615–16 and was the second version of the chronicle. Most of the text was compiled in Peru and present-day Bolivia, although it was most likely re-edited in Spain. This version received the final approbation for printing, however for unknown reasons it remained unpublished during the seventeenth century. Once in Spain, the manuscript was somehow acquired by Castilian statesman and bibliophile Lorenzo Ramirez de Prado. After Ramirez's death in 1658, it was incorporated into the library of the Colegio Mayor de Cuenca in Salamanca and finally the private library of King Charles IV of Spain in 1802. As a result of the Peninsular War, it came into the possession of Arthur Wellesley, 1st Duke of Wellington. Thus the manscript acquired the title the "Wellington Murúa." It was later sold at auction to a collector in Cologne, Germany, changing hands once more before its "rediscovery" by Manuel Ballesteros Gaibrois in the early 1950s. Ballesteros Gaibrois published a two volume edition of Historia general del Piru in 1962 and 1964 " (Wikipedia article on Fray Martín de Murúa, accessed 07-21-2011).

In 1983 the Getty Museum acquired the "Wellington Murúa" as part of the Ludwig collection of manuscripts (Ludwig XIII 16).

In 2004 a facsimile of the Galvin Murúa was published by Testimonio Compañia Editorial Madrid.

In 2008 the Getty Museum published a volume of research on both manuscripts together with a facsimile of the Getty manuscript. Among the research results were a demonstration that several images (including two by Guaman Poma) from the Galvin Murúa were removed and pasted into the Getty Murúa, although overall the Galvin Murúa contains more images than its counterpart. The images in both manuscripts were colored using paints, dyes, and silver from the Americas and Europe.