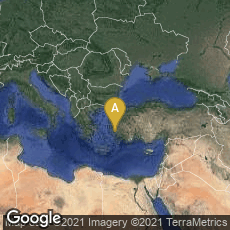 The Earliest Datable Appearance of the Serif in Stone Inscriptions The earliest datable stone inscription incorporating consistent thickening towards the ends of perpendiculars and horizontals in the lettering— later called serifs— is the Dedication of the Temple of Athena Polias in Priene, Asia Minor, by Alexander the Great (British Museum GR 1870.3-20.88 (Inscription 399 and 400).

"The distinctive feature of this consists of consistent thickening towards the ends of perpendiculars and horizontals. This thickening is often very slight in dimension but obviously always deliberate—despite the evidence in this example that the sculptor, though a first-class workman, was hurried in his execution. His deliberation is more clearly visible in a rubbing of certain characters which display this distinction (it may be rash to describe it as an innovation) to as clear a degree as possible. His speed is suggested in the lack of precision. In many respects the lettering has the appearance of a free hand rather than a geometrically regulated inscription" (Morison, Politics and Script. . . . Nicolas Barker ed. [1972] 7-8, pls. 2-3).

"In 336 BC Alexander the Great embarked on a programme of territorial expansion, which would eventually extend the boundaries of the Greek world to Egypt in the south and to India in the East. In 334 BC Alexander crossed the Hellespont, the narrow strait separating Europe and Asia, and went first to Troy. There he dedicated his armour to Athena and laid a wreath at the tomb of Achilles, the legendary hero and champion of the Greeks in the Trojan War. This act prefigured Alexander's role as a new Achilles liberating the Greek cities of Asia Minor from Asiatic rule.

"That same summer of 334 BC, a successful engagement with the Persian army at the river Granicus, east of Troy, opened the gates of Asia Minor, and Alexander proceeded to tour the Greek cities of the west coast, expelling their Persian garrisons.

"On reaching Priene, he made a further dedication to Athena. There the townspeople were laying out their new city and building a temple to its patron goddess. Alexander offered funds to complete the temple, and the inscription on this wall block, cut into a block of marble, records his gift. The inscription was found in the nineteenth century by the architect-archaeologist Richard Pullan leading an expedition on behalf of the Society of Dilettanti. It reads: 'King Alexander dedicated the Temple to Athena Polias' (http://www.britishmuseum.org/explore/highlights/highlight_objects/gr/d/dedication_by_alexander.aspx, accessed 08-18-2014).