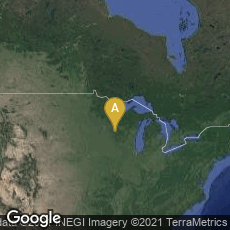 The first "large scale" use of machine methods in humanities computing in the United States was Merle Curti's study of Trempealeau County, Wisconsin: The making of an American Community: A Case Study of Democracy in a Frontier County (1959).

"Confronted with census material for the years 1850 through 1880–actually several censuses covering population, agriculture, and manufacturing–together with a population of over 17,000 persons by the latter date, Curti turned to punched cards and unit record equipment for the collection and analysis of his data. By this means a total of 38 separate items of information on each individual were recorded for subsequent manifpulation. Quite obviously, the comprehensive nature of this study was due in part to the employment of data processing techniques" (Bowles [ed.] Computers in Humanistic Research (1967) 57-58).