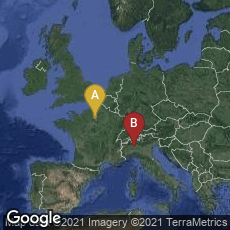 Venturi, who lived in Paris for much of his life, had access to the Leonardo da Vinci manuscripts which had been moved by order of Napoleon, after his conquests in the Italian peninsula, from the Biblioteca Ambrosiana in Milan to the Institut National in Paris. Venturi organized the codices and gave them the letters by which they are known today. His studies inspired him to claim that “il faut donc placer Léonard à la tête de ceux qui se sont occupés des sciences Physico-Mathématiques et de la vraie méthode d’étudier parmi les Modernes.” In his 56 page book, Venturi presented excerpts, translated into French, of some of the manuscripts’ most important sections on physics, mathematics and geology together with essays and notes of his own on the texts. Venturi intended this work to be the prelude to a more ambitious three-volume edition of Leonardo’s complete writings on mechanics, hydraulics and optics; however, this was never published.