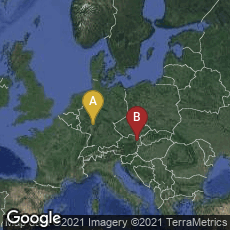 Die Goldene Bulle, the First Printed Facsimile of a Manuscript Page from a manuscript of the Golden Bull, which was commissioned in 1400 by King Wenzel. In the image on the left the emperor is shown in a blue tunic; He is joined by six artists, as King of Bohemia, as one of the seven electors. In the image on the right the Archbishop of Cologne is shown as an Elector.

Significant for book history, Thülemeyer's edition followed the large format of the medieval manuscript exactly, reproducing the two-column calligraphic text of all 46 leaves in type, and the numerous color images in black and white copperplate engravings, very close to their appearance in the original. Thülemeyer followed his facsimile with a commentary. This was the first full facsimile of a manuscript ever printed. It was not an exact facsimile since the images were not in color and the printed pages did not include all the marginal ornamentation present in the manuscript.

In 1977 publisher Akademische Druck in Graz, Austria published a full-size folio facsimile of Thülemeyer's 1697 facsimile, reproducing twenty pages of the original illuminated manuscript in color facing corresponding pages in the black and white facsimile showing the correspondence between the original manuscript and the 1697 edition. The 1977 edition, itself a minor landmark in the history of books as "the first facsimile of the first facsimile," was edited by Armin Wolf. Unlike most of Akademische Druck's facsimiles, which were expensive limited editions, the 1977 work was issued as a trade publication, and presumably in a relatively large printing, at a reasonable price.