Book of Armagh or Codex Ardmachanus (ar or 61), also known as the Canon of Patrick and the Liber Ar(d)machanus, is a 9th-century Irish illuminated manuscript written mainly in Latin. It is held by the Library of Trinity College Dublin (MS 52). 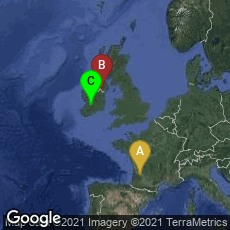 Patrick Introduces Christianity to the Irish "Christianity probably came to Ireland late in the 4th century, through channels that have left no record. It is known that there were communities of Christians in the country by 431, as Prosper of Aquitaine's Chronicle noted that Palladius, ordained by Pope Celestine, had been sent as first bishop in that year to the 'Irish believing in Christ'. Patrick, a Briton seized at the age of sixteen from his family estate by Irish raiders and brought to Ireland with many thousands of other captives, evangelized late in the 5th century and became celebrated as the apostle of the Irish. Founder of the church of Armagh, he left a significant written record in the form of his Confession and a letter to the soldiers of Coroticus (who had conducted a raid from Britain on Irish Christians), both of which survive in the early 9th-century Book of Armagh. Thanks to the efforts of Patrick and other missionaries, Christianity took root in Ireland, supplanting sun-worship, idols and abominations (as Patrick expressed it). According to the 7th-century biography by Tírechán, when Patrick crossed the River Shannon he took 'fifty bells, fifty patens, fifty challices, altar stones, books of the law [and] books of the Gospels, and left them in the new places. While the numbers may be exaggereated, they make clear the need that the new religion had for altar furnishings and books, to be used for private devotion, for missionary work, and for the celebration of the eucharist at the altar" (Meehan, The Book of Kells [202] 19). (The hyperlinks are mine).