First page of text of the first edition of Calepino.

A typical page opening of the first edition of Calepino. 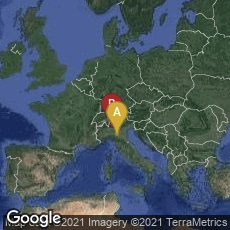 This copy of the extremely rare first edition of Calepino had the typographic portion of the title page mounted.

In 1502 Italian lexicographer Ambrosio Calepino (or Calepio) issued  Ambrosii Calepini bergomatis eremitani dictionarium from Reggio Emilia, Italy at the press of Dionysio Bertochi. This work became the most successful and most widely reprinted reference book of the early modern period, undergoing an astonishing 166 editions in the sixteenth century, followed by 32 in the seventeenth and 13 in the eighteenth.

Calepino, an Augustinian monk from Bergamo,

“devoted some thirty years to composing his dictionary, which focused on classical Latin usage and on encyclopedic information and literary examples from ancient culture. In the years after his death many, mostly anonymous editors made modifications, corrections, and especially additions, often borrowing from other dictionaries . . . In the early modern period the Calepino not only became the most widely recognized brand of dictionary, still active in the early twentieth century, but it also came to stand for the entire dictionary genre . . . At the same time the success of the Calepino solidified the association of the title ‘dictionarium’ with the dictionary genre—only a few major dictionaries were called by another title” (Anne M. Blair, Too Much to Know: Managing Scholarly Information before the Modern Age [2010] 122).

The first edition of the Dictionarium was in Latin with a few Greek equivalents, but in 1545 editions began to be published with vernacular equivalents, and later editions boasted up to eleven languages.

“In the early modern period the Calepino not only became the most widely recognized brand of dictionary, still active in the early twentieth century, but it also came to stand for the entire dictionary genre” (Blair, 122).

The Dictionarium’s enormous success as a reference work meant that copies were “read to death”; also, the fact that the work underwent numerous revisions during its long publishing history suggests that the earlier editions might not have been retained in scholarly libraries. In January 2013 the first edition of Calepino's Dictionarium was quite rare: OCLC and the Karlsruhe Virtual Catalogue cited 11 copies in libraries, only one of which (the Indiana State University copy) was in the United States.