Detail of page from Lactantius' Opera showing a space left blank for Greek text to be added later.  (Please click on the image to see the full page.) Binding probably created at the monastery of Subiaco on the first dated book printed in Italy, the Sweynheym & Pannartz Lactantius. 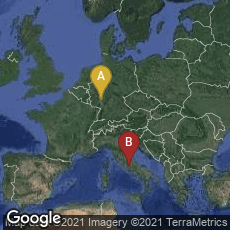 On October 29, 1465 printers Conrad Sweynheym and Arnold Pannartz, clerics from the archdioceses of Mainz and Cologne respectively, working at the Benedictine Abbey of St. Scholastica (Abbazia di Santa Scolastica) at Subiaco, Italy, and assisted by the monks at the monastery, issued the Opera of the third century Christian scholar Lucius Caecilius Firmianus Lactantius who became a religious advisor to Constantine I, and in his old age tutor to Constantine's son, Flavius Julius Crispus. This was the first dated book printed in Italy. It also contained the first printing in Greek by any printer, using a font that was apparently cast in the process of printing the text, as in the earliest printed quires the space for Greek passages are left blank. This is the only appearance of this Greek type; Sweyheym and Pannartz cast a second Greek font for their books printed at Rome. In January 2013 a digital facsimile of the 1465 Lactantius was available from the Bayerische Staatsbibliothek at this link. ISTC No.: il00001000.

Sweynheym had probably learned the craft of printing in the shop of Fust and Schoeffer in Mainz. Also in 1465 Peter Schoeffer at Mainz printed a few words of Greek, using a crude, partial font, in an edition of Cicero's Paradoxa (issued as an addendum to an edition of Cicero's De officiis). In July 2014 a digital facsimile of Schoeffer's 1465 De officiis with the Paradoxa was available from the Bayerisches Staatsbibliothek at this link. ISTC No. ic00575000.

A copy of the 1465 Lactantius in an extremely rare 15th century binding thought to have been produced at Subiaco was sold at Christie's, London on November 29, 2000 (Sale 6417, Lot 26) for £751,750. The binding on that copy was identified as Roman work by Tammaro de Marinis (La legatura artistica in Italia nei secoli XV e XVI, I, no.332, plate 64), its simple decoration (fillets and a single tool) and somewhat archaic style (such as the fastenings) strongly suggest a provincial, rather than Roman, shop, and Anthony Hobson argued for localizing the binding at Subiaco (Renaissance Studies, 9, 1995). This Lactantius may therefore be one of the few 15th-century Subiaco bindings to survive; a 17/18th-century rebinding programme at the monastery left very little intact. The cover was also published in Enciclopedia Italiana di Scienze, Lettere ed Arti (vol. 20, Rome: 1933), pl. 96, to illustrate the article on binding.