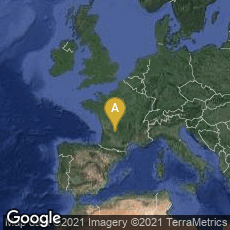 Discovery of the Cro-Magnons, the First European Early Modern Humans

After workmen stumbled across extinct animal bones, flint tools and a human skull in a rock shelter near the French village of Les Eyzies, French geologist and prehistorian Louis Lartet was asked to conduct excavations. In March 1868 Lartet discovered the first five skeletons of early modern humans at the Abri de Cro-Magnon (rock shelter of Cro-Magnon), near the commune of Les Eyzies-de-Tayac-Sireuil in southwestern France. He discovered the partial skeletons of four prehistoric adults and one infant along with perforated shells used as ornaments, an object made from ivory, and worked reindeer antler. These Cro-magnon humans were soon identified as a new prehistoric human race distinct from the Neanderthal fossils discovered in Germany in 1856.