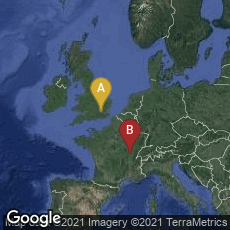 The Earliest Surviving Photograph Taken by Nicéphore Niépce: A Process that Never "Caught On"

In 1826 or 1827 French inventor Nicéphore Niépce created View from the Window at Le Gras, the oldest surviving photograph, using the process of heliography that he had invented around 1822. The photograph shows parts of the buildings and surrounding countryside of his estate, Le Gras, in Saint-Loup-de-Varennes, as seen from a high window. The exposure is thought to have required from eight hours to several days.

"Niépce captured the scene with a camera obscura focused onto a 16.2 cm × 20.2 cm (6.4 in × 8.0 in) pewter plate coated with Bitumen of Judea, a naturally occurring asphalt. The bitumen hardened in the brightly lit areas, but in the dimly lit areas it remained soluble and could be washed away with a mixture of oil of lavender and white petroleum. A very long exposure in the camera was required. Sunlight strikes the buildings on opposite sides, suggesting an exposure that lasted about eight hours, which has become the traditional estimate. A researcher who studied Niépce's notes and recreated his processes found that the exposure must have continued for several days.

"In late 1827, Niépce visited England. He showed this and several other specimens of his work to botanical illustrator Francis Bauer, who encouraged him to present his "heliography" process to the Royal Society. Niépce was unwilling to reveal any specific practical details of his process, so the Royal Society declined his offer. Before returning to France, he gave Bauer the specimens and a draft of the remarks he had prepared to accompany his presentation. After Bauer's death in 1840, the specimens passed through several hands and were occasionally exhibited as historical curiosities. The View from the Window at Le Gras was last seen in 1905 and then fell into oblivion.

"Historian Helmut Gernsheim tracked down the photograph in 1952 and brought it to prominence, reinforcing the claim that Niépce is the inventor of photography. He had an expert at the Kodak Research Laboratory make a modern photographic copy, but it proved extremely difficult to produce an adequate representation of all that could be seen when inspecting the actual plate. Gernsheim heavily retouched one of the copy prints to clean it up and make the scene more comprehensible, and until the late 1970s he allowed only that enhanced version to be published. It was apparently at the time of the copying that the plate acquired disfiguring bumps near three of its corners, causing light to reflect in ways that interfere with the visibility of those areas and of the image as a whole.

"In 1963, Harry Ransom purchased most of Gernsheim's photography collection for The University of Texas at Austin, but the Niépce heliograph was not included in the sale. Shortly thereafter, Gernsheim donated it. Although it has rarely traveled since then, in 2012–2013 it visited Mannheim, Germany as part of an exhibition entitled The Birth of Photography—Highlights of the Helmut Gernsheim Collection. It is normally on display in the main lobby of the Harry Ransom Humanities Research Center in Austin, Texas " (Wikipedia article on View from the Window at Le Gras, accessed 10-24-2013).

Why then did Niépce's process never catch on? Why is the invention of photography typically credited to Louis Daguerre and William Henry Fox Talbot? Clearly the extremely slow speed of developing the image had to be a factor. According to an email I received from historian of science William B. Ashworth, Jr. on March 7, 2014, there were other reasons:

"It is a convoluted, and sad, story. Niépce travelled to England in 1827 to tend to his mentally ill brother, and he brought several heliographs with him. He met people who were quite interested in his process, and he tried to make arrangements to give a demonstration to the Royal Society of London.  However, everything went wrong, and it really was no one's fault. The Royal Society was practically dysfunctional at the time, as the president, Humphry Davy, was dying, and there was considerable scrambling to determine his successor.  John Herschel, who would be a photographic pioneer himself in the 1830s, was so disgusted with the Society that he resigned his position as secretary and refused to attend meetings. The upshot was that the presentation never came to pass, and the people who would have been the most interested in Niépce’s demonstration, like Herschel, never met Niépce or saw his work. Niépce returned home, his heliotypes still in his luggage, and although he lived until 1833, and collaborated at the end with Louis Daguerre, he gradually disappeared from public view. When the Daguerrotype (a different type of photographic process) was first demonstrated to a revitalized Royal Society in 1839, Niépce's name was all but forgotten. Niépce did all the right things, but he never reached the right people.  Had he made his trip to England a year earlier, or even a year later, he might have found a receptive audience, and the history of photography might have played out quite differently.  Life is like that, sometimes."