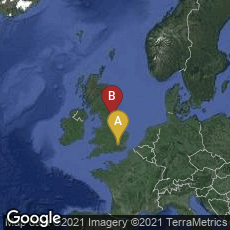 English writer Laurence Sterne published the bawdy, humorous novel, The Life and Opinions of Tristram Shandy, Gentleman in nine volumes, the first two appearing in 1759, and seven others following over the next seven years (vols. 3 and 4, 1761; vols. 5 and 6, 1762; vols. 7 and 8, 1765; vol. 9, 1767). As its title suggests, the book is ostensibly Tristram's narration of his life story, but one of the central jokes of the novel is that Tristram cannot explain anything simply, and must make explanatory digressions (often erudite) on the widest variety of topics to add context and color to his tale, to the extent that his own birth is not even reached until Volume III.

In the work Laurence Sterne employed unusual visual imagery that became famous in the history of book illustration: a black page that mourned the death of a character, a squiggly line drawn by another character as he flourished his walking stick, and on page 169, vol. 3, of the first edition an example of actual marbled paper mounted on a page. Sterne, an eccentric and tubercular Anglican priest, badgered his publisher, Dodsley, to include the marbled paper (which he called “the motley emblem of my work”) in order to suggest something about the opacity of literary meaning. Later editions economized production cost by replacing the actual mounted piece of marbled paper with a monochrome engraved reproduction.

English printmaker and satirist William Hogarth was commissioned to design two plates to be used as frontispieces in two of the volumes. The frontispiece of vol.1 by Hogarth depicts Corporal Trim reading a sermon on conscience to the sleeping Dr Slop, Uncle Toby, and Walter Shandy, and the other, the frontispiece of vol. 3, the baptism of Tristram.

Editions, translations and adaptations of Tristram Shandy continue to occur in many media. Relevant to illustrations in particular, in 2009, commemorating the 250th anniversary of Sterne's "Black Page," originally published in 1779 on p. 73 of Volume I, the Lawrence Sterne Trust held The Black Page Exhibition at Sterne's home, Shandy Hall, inviting 73 writers and artists to create their own "Black Page for exhibition and sale at auction. The page contained links to the websites of nearly all of the artists, reproducing the images each created for the exhibition. In 2011, on the 250th anniversary of Sterne's marbled page, the Lawrence Sterne Trust invitied 170 artists to produce their own versions of Sterne's "Emblem of My Work, most of which were reproduced at this link.