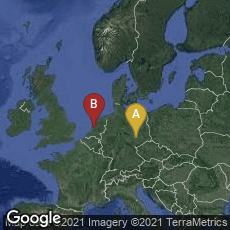 A painting of Hugo de Vries in his retirement, by Thérèse Schwartze

In 1886 Dutch botanist and geneticist Hugo de Vries began studying and experimenting with Oenothera lamarckiana, a species of evening primrose, after discovering a number of variants of this species growing wild in a meadow. Taking seeds from these, and growing them in his experimental gardens, he found that over the years several new forms appeared, most of which bred true.  De Vries called these new forms “mutations” and formulated a series of theses—the Laws of Mutation—in which he postulated that new elementary species arose through a process of discrete steps (“mutations” or “saltations”), and usually remained constant from their moment of origin. The results of his more than ten years of experimentation and study he published in Die Mutationstheorie. Versuche un Beobachtungen über die Entsehung von Arten im Pflanzenreich (2 vols., Leipzig, 1901-1903), in which he described in detail his work on the segregation laws, on phenomena of variation, and on plant mutations as the basis of evolution.