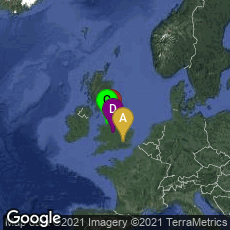 Binding on the first edition of Bradshaw. The timetables were issued in a pocket 12mo format.

On October 19, 1839 English cartographer, printer and publisher George Bradshaw of Manchester issued from Manchester and London a very small cloth-bound book entitled Bradshaw's Railway Time Tables and Assistant to Railway Travelling, at the cost of sixpence (2½p). This completely new class of publication contained route maps and train schedules for the Liverpool and Manchester Railway, the first twin-track inter-urban passenger railway in which all the trains were timetabled and ticketed. One week later, on October 25, 1839, Bradshaw issued a similar time table for the London and Birmingham Railway, the first intercity line built into London, at the price of 1s. These were the first railway timetables —very necessary tools for travelers in the new and confusing railroad networks. The original Bradshaw time tables were published before the limited introduction of standardized Railway time in November 1840, and its subsequent development into standard time. As a result Bradshaw provided an explanation of the time then employed by the railroads:

NOTE. LONDON TIME is kept at all the Stations on the Railway, which is 4 minutes earlier than Reading time; 7 1/2 minutes before Cirencester time; 11 minutes before Bath and Bristol time; and 18 minutes before Exeter time."

From this small beginning Bradshaw expanded into publishing a wide variety of time tables and travel guides. After his early death in 1853 his business continued—so much so that "Bradshaw" became synonymous in England with time table and travel guide. The last Bradshaw guides were published in 1961.