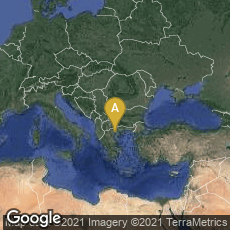 On January 15, 1962 during the widening of the national road leading from Thessaloniki to Kavala in Greece workers discovered several large cist graves at Derveni, roughly 10 km to the north of Thessaloniki. Among the remains of the funeral pyre on top of the covering slabs of what was designated tomb A a charred papyrus roll was discovered. This ancient Greek papyrus roll, dating from around 420 BCE, is the earliest surviving European manuscript, as distinct from papyri found in Egypt or the Middle East. Designated the Derveni papyrus, it is "a philosophical treatise that is an allegorical commentary on an Orphic poem, a theogony concerning the birth of the gods, produced in the circle of the philosopher Anaxagoras in the second half of the 5th century BC." It has also been called "the most important new piece of evidence about Greek philosophy and religion to come to light since the Renaissance."

In April 2014 the Greek text and English translation of the Derveni papyrus were available from the IMOUSEION Project at the Center for Hellenic Studies at Harvard at this link.