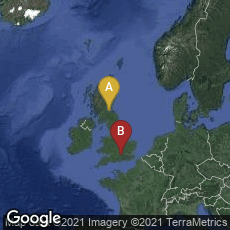 In 1918 English statistician, evolutionary biologist, geneticist and eugenicist Ronald A. Fisher, then of Bradfield College, published "The Correlation Between Relatives on the Supposition of Mendelian Inheritance," Transactions of the Royal Society of Edinburgh 52 (1918) 399-433. This paper reconciled Mendelian genetics with the biometric observations of Karl Pearson and Francis Galton. It laid the foundation for what came to be known as biometrical genetics, introducing the analysis of variance— a considerable advance over the earlier correlation methods, and included the first use of "variance" in statistics. The paper showed that the inheritance of traits measurable by real values (i.e., continuous or dimensional traits) is consistent with Mendelian principles. It formed the basis of the genetics of complex trait inheritance, and mitigated debates between biometricians and Mendelians on the compatibility of particulate inheritance with natural selection.

"Fisher had originally submitted his paper (then entitled "The correlation to be expected between relatives on the supposition of Mendelian inheritance") to the Royal Society, to be published in the [Philosophical] Transactions of the Royal Society of London. The two referees, the biologist R. C. Punnett and the statistician Karl Pearson, believed that the paper contained areas they were unable to judge, due to lack of expertise, and expressed some reservations. Though the paper was not rejected, Fisher carried a feud with Pearson from 1917 on, and instead sent the paper via J. Arthur Thomson to the Royal Society of Edinburgh, which published it in its Transactions" (Wikipedia article on The Correlation between Relatives...., accessed 12-21-2013).