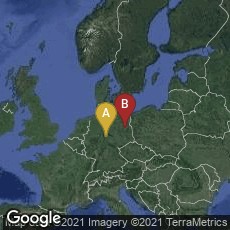 One of the key conceptual papers in the early history of molecular biology, this work represented the debut in genetics of the physicist Max Delbrück, a student and lifelong friend of Danish physicist Niels Bohr. Delbruck turned from quantum physics to biology after being inspired by speculations in Bohr's 1932 lecture "Light and life," about the application of quantum mechanics to problems in biology.

"Über die Natur der Genmutation und der Genstruktur" (often referred to as "the green paper" after the color of its printed wrappers, or the "Dreimanner" paper after the number of its authors) was divided into four sections. The first, by Timofeeff-Ressovsky, described the mutagenic effects of x-rays and gamma rays on Drosophila melanogaster; the second part, by Zimmer, analyzed Timofeeff-Ressovsky's results theoretically. The third and most remarkable section, by Delbrück, put forth a model of genetic mutation based on atomic physics that "shows the maturity, judgment and breadth of knowledge of someone who had been in the field for years . . . its carefully worded predictions have stood the test of time" (Perutz, p. 557).

The three authors of the paper "concluded that a mutation is a molecular rearrangement within a particular molecule, and the gene a union of atoms with which a mutation, in the sense of a molecular rearrangement or dissociation of bonds, can occur. The actual calculations of the size of the gene, deduced from calculations on the assumption of a spherical target, were not cogent, as Delbrück [later] wryly admitted in his Nobel Prize lecture, but the entire approach to the problem of mutation and the gene adopted by the three collaborators was highly stimulating to other investigators" (DSB [suppl.]).

The Timofeeff-Zimmer-Delbrück paper provided much of the material for Erwin Schrodinger's book What is Life? (1944), a work that takes a "naive physicist's" approach to the problems of heredity and variation; it is often cited as having inspired Watson, Crick, Wilkins and others to focus their careers on the problems of molecular biology. In his 1987 paper, "Physics and the Riddle of Life," Max Perutz examined the relationship between Schrodinger's book and the Timofeeff-Zimmer-Delbrück paper, pointing out, among other things, that the two most important chapters in Schrodinger's book were paraphrased from "Ueber die Natur der Genmutation und der Genstruktur."

"In retrospect, the chief merit of What is Life? is its popularization of the Timofeeff, Zimmer and Delbrück paper that would otherwise have remained unknown outside the circles of geneticists and radiation biologists" (Perutz, p. 558). Perutz, "Physics and the riddle of life," Nature 326 (1987) 555-559.