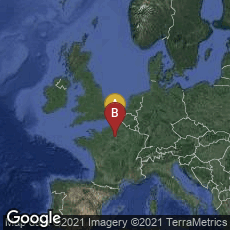 During the decade from 1777 to 1787 more books and pamphlets were published in France on Animal Magnetism (Mesmerism in the movement's own terminology) than on any other subject. On the eve of the French Revolution the Viennese-born Dr. Franz Anton Mesmer held sway over the public, "mesmerized" them as we would say, with his philosophy aimed at creating a more perfect society through harmony with the physical universe, and with his healing through "rapport" between physician and patient. Mesmer always insisted on the physical character of his cures, which he at first attributed to magnetic forces, or electricity. He later abandoned these in favor of a "universal fluid" acting on the nervous system which was susceptible to it on account of its inherent property of "animal magnetism." At first Mesmer used actual magnets to effect cures, borrowed from the Hungarian astronomer and Jesuit priest Maximilian Hell. Later Mesmer concluded that the magnets could be dispensed with in that nearly all substances could be magnetized by touch, and it was this that led him to the idea of a magnet-like property inherent in living creatures. Initially he employed direct contact between his body of the physician and the patient. To transfer the healing magnetic force, Mesmer would sit with patients' legs squeezed between his knees, press their thumbs in his hands, stare intensely into their eyes, and stroke their limbs to manipulate their internal ether.

Mesmer promoted Animal Magnetism through his own publications and those of his many followers. His most famous book was Mémoire sur la dévouverte du magnétisme animal (Geneva & Paris, 1779). He also had a great flair for the dramatic and theatrical. In Paris he was besieged by more patients than he could hope to treat individually—as many as two hundred a day, so he invented what he called the baquet to accommodate groups at a time. Because the reactions Mesmer provoked seemed to be contagious, the dramatic effects were exacerbated in a crowded room. Some baquets could seat twenty people, and Mesmer had four of these in his Paris treatment rooms at the Hôtel Bullion on rue Coq-Héron.

The baquet, as Mesmer named his magnetic device, was in keeping with the contemporary craze for medical electricity. Physicians and apothecaries frequently prescribed electric shock treatment, especially in attempts to cure paralysis, and often exposed the sick to a more general "electrical aura" as a healing agent. Benjamin Franklin, then American ambassador to France, was fond of demonstrating the power that could be harnessed in a Leyden jar, the prototype of the modern battery, by using one to send a bolt of electricity through a chain of people.  The sole remaining example of Mesmer's baquet, is preserved in the Musée d'Histoire de la Médecine et de la Pharmacie at Lyon. An excellent image of it was reproduced in Cabinet Magazine, Spring 2006.

Mesmer's critics observed that the actual and remarkable cures effected were due to Mesmer's working on the "imagination" of a "willing patient," who could be put into a "special state of mind." The peculiar nature of these cures continued to provoke interest among medical men, even after the Académie royale des sciences report of 1784 by Benjamin Franklin, Antoine Laurent Lavoisier and others attributed the power of Mesmerism to the "imagination." This report was translated into English in 1785. Interest of physicians also continued despite the scandalous financial practices of Mesmer and his associates in Mesmer's Society of Universal Harmony, initiation into which could cost a man his fortune. Successful surgery was practiced on patients in a mesmeric state by Topham and Ward and John Elliotson in England in the 1840's. About the same time James Braid identified the valid phenomena in Animal Magnetism, coining the terms hypnosis and hypnotism. Jean-Martin Charcot in the later 19th century connected the clinical manifestations of hysteria with artificially indcued hypnotic phenomena, and Sigmund Freud developed psychoanalysis from his acquaintance with Charcot's practices. Thus through Memser and his disciples medical attention was directed toward psychological phenomena and the first scientific steps toward an adequate approach to psychological problems were taken.

In its own time Animal Magnetism was as much a social movement as a medical practice. It spread from Paris all over Europe and to America, had an official program, administered instruction in its practices for certain fees, encouraged testimonials from members and urged the spread of Animal Magnetism "for the sake of humanity." It was perceived as a potentially radical force in France, provoked enormous public controveries and official condemnations, and stirred up its followers to a pitch of "religious" fervor.

Among the exceptional group of manuscripts that I offered for sale in my catalogue eight entitled Twelve Manuscripts issued in 1980, were the papers of the Amiens chapter of the Society of Universal Harmony formed by Mesmer and his associates Guillaume Kornmann and Nicolas Bergasse. We described the collection as follows:

ANIMAL MAGNETISM (MESMERISM). A collection of 56 manuscript items in French representing the correspondence & papers of the Amiens affiliates of the Animal Magnetism movement. Totalling nearly 300pp., including: {1} 10 letters & 5 documents signed by Franz Anton MESMER (1733-1815). {2} 12 letters signed by Guillaume KORNMANN, co-founder & treasurer of the Society of Universal Harmony, the organization through which Animal Magnetism was offically promoted. {3} 4 documents signed by Nicholas  BERGASSE (1750-1832), theoretician of Animal Magnetism. {4} A collection of approximately 100 case reports by a physician practicing Animal Magnetism. {5} 10 formal documents, including contracts for the teaching & practice of Animal Magnetism, membership lists for the Society of Universal Harmony, and declarations docuementing the schism which led to the movement's decline {6} 5 theorectical works, including an MS. copy in English of the illustrated textbook of Animal Magnetism written by Bergasse with a key to its symbols, and and MS. French version of this work {7} Miscellaneous papers of the Amiens group. All in very good to fine condition, in a half mroocco box. Mostly 1784-85, with a few later dates.

. . . . Some 40 items in the collection represent correspondence between the Paris and Amiens Societies of Universal Harmony or of the Amiens Society itself. These include 10 letters from Mesmer (signed Mesmer) and 12 letters from Guillaume Kornmann, the Society's treasurer, a Strasbourg banker who eventually broke away from Mesmer in 1785, taking with him the movement's theoretician, Nicolas Bergasse. The correspondence documents the fees, rules, and social complexion of the membership (e.g., a list of official practioners of Mesmerism names General Lafayette to teach it in the United States which he had served so well in the Revolution). It also shows the nature of the issues between the parent and local organization, and the emotional tone of the movement, particular in its great crisis in 1785 [when Mesmer left the country.]

. . . .The philosophy of Animal Magnetism was felt as an intellectual force for nearly 100 years after its inception. With roots going back to the hermetic thinkers of the 17th century, passing through Newton and the English physician Richard Mead into the Enlightenment, and extending into Romanticism and Naturphilosophie, the movement had many ramifications in culture and science. As representative of the philosophy of Animal Magnetism, the collection contains two manuscript versions of Nicolas Bergasse's Théorie du monde, the illustrated textbook of the movement, published in an engraved volume in 1784, and consdiered "très-rare" by Dureau, who prepared the standard bibliography of Animal Magnetism in 1869. Bergasse, whose inclinations toward systematization were much stronger than Mesmer's, was the theoretician of the movement. His "theory of the world and organic beings" was in part hieroglyphic, and the symbols used the text were "generally considered as magic hieroglyphics, capable of communicating primitive truths" ( Darnton 186 & reproducing illustration.). Subjects treated in the Théorie range from theology to physics, medicine and morals. The occult symbols have affinity with alchemical and other magical symbols, and a more elaborate and elegant English language version. The French manuscript appears to be in the hand of our Amiens physician; it may represent his copy or his interpretation of Bergasse's work. The English manuscript is contemporary with or a lilttle alter than the other materials in the collection, but is not an orginal part of the Amiens papers. It is a carefully prepared folio with diagrams and illustrations on nearly every one of its c. 100pp. What most intrigues us about it is that there is no published English language version of Bergasse's text. . . .

Freud's Die Traumdeutung, "the Last Great Original Work in Science to be Published First as a Monograph Rather than in a Scientific Journal"
The Origin of Psychoanalysis
Edward L. Bernays, Nephew of Freud, Founds Public Relations