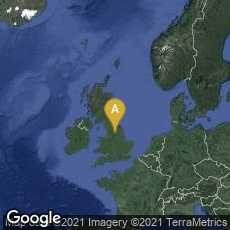 In 1931 English physicist and molecular biologist at the University of Leeds William Astbury, a student of William Lawrence Bragg, was the first to study proteins by X-ray analysis. He applied X-ray analysis to the structure of hair, wool, and related fibers, of which the protein keratin is the principal component, and identified two states: α-keratin and β-keratin.

"At Leeds Astbury studied the properties of fibrous substances such as keratin and collagen with funding from the textile industry. (Wool is made of keratin.) These substances did not produce sharp patterns of spots like crystals, but the patterns provided physical limits on any proposed structures. In the early 1930s, Astbury showed that there were drastic changes in the diffraction of moist wool or hair fibres as they are stretched significantly (100%). The data suggested that the unstretched fibres had a coiled molecular structure with a characteristic repeat of 5.1 Å (=0.51 nm). Astbury proposed that (1) the unstretched protein molecules formed a helix (which he called the α-form); and (2) the stretching caused the helix to uncoil, forming an extended state (which he called the β-form). Although incorrect in their details, Astbury's models were correct in essence and correspond to modern elements of secondary structure, the α-helix and the β-strand (Astbury's nomenclature was kept), which were developed twenty years later by Linus Pauling and Robert Corey in 1951. Hans Neurath was the first to show that Astbury's models could not be correct in detail, because they involved clashes of atoms. Interestingly, Neurath's paper and Astbury's data inspired H. S. Taylor (1941,1942) and Maurice Huggins (1943) to propose models of keratin that are very close to the modern α-helix.

"In 1931, Astbury was also the first to propose that mainchain-mainchain hydrogen bonds (i.e., hydrogen bonds between the backbone amide groups) contributed to stabilizing protein structures. His initial insight was taken up enthusiastically by several researchers, including Linus Pauling" (Wikipedia article William Astbury, accessed 01-16-2014).