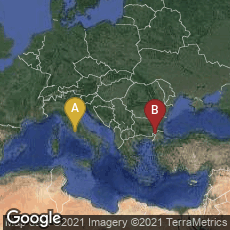 Marinetti's Incunable of Poetic and Typographic Experimentation of the 20th Century Excerpted in journals between 1912 and 1914, Italian futurist Filippo Tommaso Marinetti's sound poem and concrete poem, Zang Tumb Tumb (usually referred to as Zang Tumb Tuuum), was published as an artist's book by Marinetti's publishing company, Edizioni Futuriste di "Poesia", in Milan in 1914. An account of the Battle of Adrianople, in October 1912 during the First Balkan War, which Marinetti witnessed as a reporter for the French newspaper L'Intransigneant, the poem used what Marinetti called Parole in libertà, (words in freedom)— radically creative typography, different typefaces, some hand-arranged, and of various sizes to show explosions of grenades and shots of the weapons. The text uses onomatopoeias to express the variety of sounds and noises of battle. including emulations of sounds of gunfire and the clatter of telegraphic messages being transmitted and received.

"In 1914, Marinetti put these theories [his theories of language and typography] into practice when he published Zamg Tumb Tuum, a book that has been called 'the incunable of the entire poetic experimentation of our century.'. . .  It in fact opens with the 'Destruction of Syntax' manifesto and ends with the 'Technical Manifesto.' . . .Marinetti translated his impression into a poetic prose which makes full use of both the new kind of writing and the typographical freedom he advocated, mixing letter sizes, bold type and italics, and introducing all kinds of typographical fantasies" (Vincent Giroud, Parole in Liberta. Marinetti's Metal Book. Code(x) +2 Monograph Series No.  [2102] 5).

The poem is read aloud in Italian in the video below: