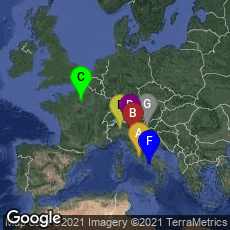 "The Founding and Manifesto of Futurism" by Marinetti Republication of Marinetti's Manifesto of Futurism in Paris in Le Figaro, 20 February 1909

On February 5, 1909 Italian poet and editor Filippo Tommaso Marinetti published Manifesto iniziale del Futurismo in the newspaper Gazzetta dell'Emilia in Bologna. In Milan, Marinetti had begun writing its list of eleven demands in October or November 1908, and in January 1909 he circulated to his friends a two-page leaflet entitled Manifesto del Futurismo containing the programmatic section. Later that month Marinetti wrote the narrative preamble that would accompany his list of demands, and sent the document to the Gazzetta dell'Emilia, and other newspapers. Within the month of February, Marinetti's first manifesto of futurism was reprinted, according to the article on Marinetti in the Italian Wikipedia, in 5 Italian newspapers and one magazine: in Il Pungolo of Naples on February 6, in Arena in Verona on February 9, in Il Piccolo of Trieste on February 10, in Il Giorno of Rome on February 16, and in the weekly magazine Tavola rotonda of Naples on February 14. On February 20, through the influence of one of the major shareholders of Le Figaro, who had been a friend of Marinetti's father, the manifesto was published in French on the front page of the leading French newspaper, Le Figaro. From this version, which was headed simply, "Le Futurisme" on the front page of the newspaper, but which is typically translated as The Founding and Manifesto of Futurism, Marinetti became an international celebrity. On the issue of whether or not Marinetti revised the text during the various rapid reprints or in the French translation I have seen no scholarship.

"The Futurist Revolution did not seem, at first, to be much concerned with books. In Filippo Tommaso Marinetti's intitial Futurist Manifesto . . . books are hardly mentioned; whereas trains, airplanes, the automobile are gloried as tools and symbols of the modern age, libraries, like museums are to be burned. But it would be wrong to view this book-burning—an image inevitably associated for us with all too real subsequent occurences under totalitarian regimes—in sinister terms. The primary impulse of Futurism, indeed its raison d'être, was to shake Italy and Italians out of what Marinetti and his friends saw as a paralyzing obsession with the glories of the past. Passéism—a futurist coinage—was the enemy. A recent nation-state, far from unified within its own borders and unsure of its status among other European powers, Italy, in their view, needed to embrace modernity wholeheartedly; instead of looking at the past, with the inevitable result of an inferiority complex, it ought to confront the future, boldly assert its own creative voice. And books, in the development of which Renaissance Florentine, Milanese, and Ventian printers had played such a prominent part, were a thing of the past.

"Yet, paradoxically, Futurism was also a revolution of the book, and there rests, in fact, one of its greatest artistic legacies. This revolution, as in many other -isms of the twentieth-century, began as a revolution of the word, an opening up of language to all kinds of hitherto unexplored possibilities. But Futurism was much more than a literary movement: as much as the writing of the book and its contents, Futurist poets and artists were interested in its making—its design, thpography, printing, and final appearance. . . ." (Vincent Firoud, Marinetti's Metal Book. Code(x)+2 Monograph Series No. 1, Berkeley: Codex Foundation, 2012).

In January 2014 an English translation of Marinetti's first manifesto and a reproduction of its appearance in Le Figaro were available from Italianfuturism.org at this link.