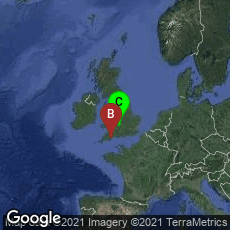 In the summer of 1825 Father John MacEnery, a Catholic priest from Limerick, Ireland, and private chaplain to the Cary family at Torre Abbey in Devon, England, explored Kent’s Cavern, a cave system near Torquay, South Devon. He excavated there in 1825, 1826, and 1829. During this period he unearthed the fossil remains of at least 15 extinct mammals as well as several flint tools, and in August 1829 he discovered two human fossil skeletons, now recognized as dating from the Upper Paleolithic. MacEnery initially believed that the evidence he unearthed confirmed the existence of mankind before the Biblical Deluge, however, after several communications with William Buckland—who vehemently opposed this view—MacEnery was persuaded to change his opinion. In 1823 Buckland had found the first genuine human fossil found in England, but because of the prevailing scientific/religious views, and his own bias, Buckland misinterpretted the evidence. MacEnery's discoveries, and his tentative interpretation of them, represented the first attempt to show the evidence of human antiquity in England.

MacEnery prepared an account of his explorations at Kent's Cavern entitled Cavern Researches; however, as a private chaplain with no personal funds he could not afford to publish his manuscript. He attempted to raise money for publication by subscription, but without success. His work remained unpublished at his death in 1841, and was lost for a period of time, but it came to light, and in August 1856, remarkably coincident with the discovery of the Neanderthal 1 remains, Edward Vivian presented the first brief account of MacEnery’s memoir of his initial exploration of Kent’s Cavern at the Twenty-Sixth Meeting of the British Association for the Advancement of Science held in Cheltenham. This was duly published the year later in the Notes and Abstracts of the meeting, pp. 78-82, as "Researches in Kent’s Cavern, Torquay, with the original MS. memoir of its first opening, by the late Rev. J. MacEnery (long supposed to have been lost) and the report of the sub-committee of the Torquay Natural History Society."

Together with paleontologist William Pengelly, Vivian had formed part of a committee appointed by the Torquay Natural History Society in 1846 to explore a portion of the cavern. Vivian’s 1847 report of the committee’s findings had confirmed MacEnery’s account—like MacEnery, the committee found flint implements mixed with the remains of extinct animals in a layer of earth underneath a thick floor of stalagmite. Vivian’s report was read before both the British Association and the Geological Society in 1847, but at that time it was deemed not credible enough for publication.

Vivian was able to edit MacEnery's manuscript for publication in London in 1859 as Cavern Researches, or, Discoveries of Organic Remains, and of British and Roman Reliques, in the Caves of Kent’s Hole, Anstis Cove, Chudleigh, and Berry Head.

In his preface, Vivian gave a brief account of the manuscript’s history after MacEnery’s death:

"The manuscript was purchased in a lot of sermon notes and other papers by the late Mr. Lear, of Lawrence Place. It was for many years overlooked and supposed to be altogether lost to science . . .  Having accidently discovered that the greater portion of the Memoir was in the possession of Mr. Lear, I published some extracts in the Torquay Directory . . . It was subsequently purchased, with Mr. Lear’s cabinet of fossils, by W. Long, Esq. F.G.S., who most liberally presented it to me with a view to its publication. The manuscript is in a very imperfect state, consisting of fragments the original notes, a portion being rewritten several times with considerable alterations. In order to preserve the freshness of first impressions, and the exact statement of Mr. Mac Enery’s views, I give it, as far as possible verbatim, scrupulously making no addition, and only omitting those passages which are in duplicate or irrecoverably mutilated, and readjusting the whole, as far as practicable, in a connected series . . . " (pp. v-vi).

Vivian issued two versions of Cavern Researches simultantaneously through the same publisher: an 8vo edition of which a digital facsimile is available from the Internet Archive, and a folio edition with 17 lithographed plates not reproduced in the 8vo edition. In the 1980s I owned a copy of the folio edition which was acquired by the Linda Hall Library in Kansas City at the auction of my Darwin's Century collection. The edition size of both versions must have been small, as both are extremely scarce. The complete version of MacEnery’s manuscript (without illustrations) was first published in Part II of William Pengelly’s The Literature of Kent’s Cavern (1869).

Under the supervision of William Pengelly, Kent's Cavern, and the nearby Brixham Cave, became remarkably fruitful sites for the discovery of human origins in England. One useful summary available online in April 2014 was Donald A. McFarlane and Joyce Lundberg, "The 19th century excavation of Kent’s Cavern, England," Journal of Cave and Karst Studies, 67, no. 1 (2005) 39-47.