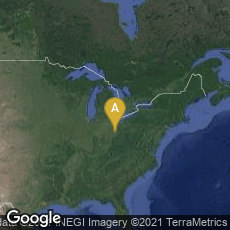 Thomas C. Mendenhall Issues One of the Earliest Attempts at Stylometry In "The Characteristic Curves of Composition," Science 9, No. 214, 237-249, American autodidact physicist and meteorologist Thomas. C. Mendenhall of The Ohio State University, Columbus, Ohio, published one of the earliest attempts at stylometry, the quantitative analysis of writing style. Prompted by a suggestion made in 1851 by the English mathematician Augustus de Morgan, Mendenhall  “proposed to analyze a composition by forming what may be called a ‘word spectrum,’ or ‘characteristic curve,’ which shall be a graphic representation of an arrangement of words according to their length and to the relative frequency of their occurrence." (p. 238) These manually computed curves could then be used as a means of of comparing models of the writing style of authors, and potentially as a means of identifying the writing of different authors.

"Mendenhall attempted to characterize the style of different authors through the frequency distribution of words of various lengths. In this article Mendenhall mentioned the possible relevance of this technique to the Shakespeare Authorship Question, and several years later this idea was picked up by a supporter of the theory that Sir Francis Bacon was the true author of the works usually attributed to Shakespeare. He paid for a team of two people to undertake the counting required, but the results did not appear to support this particular theory. It has however since been shown by Williams that Mendenhall failed to take into account 'genre differences' that could invalidate that particular conclusion. For comparison, Mendenhall also had works by Christopher Marlowe analysed, and those supporting the theory that he was the true author seized eagerly upon his finding that 'in the characteristic curve of his plays Christopher Marlowe agrees with Shakespeare about as well as Shakespeare agrees with himself' "(Wikipedia article on Thomas Corwin Mendenhall, accessed 05-18-2014)

Writing at the end of the nineteenth century, Mendenhall described his counting machine, by which two ladies computed the number of words of two letters, three, and so on in Shakespeare, Marlowe, Bacon, and many other authors in an attempt to determine who wrote Shakespeare.