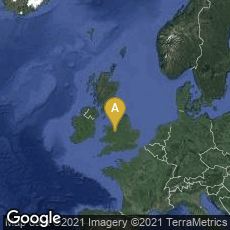 The Finest Surviving Example of Roman Monumental Lettering in Britain

Fragments of a sandstone inscription from the entrance to the Forum Viroconium Cornoviorum, part of a Roman settlement at present-day Wroxeter, near Shrewsbury, England, were discovered by archaeologist Donald Atkinson during his excavation of the Forum in 1923-24. The inscription records that the Forum was erected by the Cornovii community during the fourteenth year of the reign of the Emperior Hadrian. The exceptional quality of the writing has been used by some as evidence that Hadrian visited the city during his brief visit to Britain in 121-22 CE; it was argued that only a mason travelling in Hadrian's entourage would have been able to carve to such a high standard. This argument has since been disputed.

"Athough damaged, it is the largest and undoubtedly the finest surviving example of Roman monumental lettering in Britain" (Stan Knight, Historical Scripts from Classical Times to the Renaissance (2009) A4 (pp. 20-21, with excellent images).