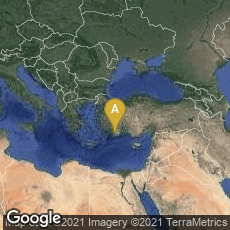 Originally about 25,000 words long, filling 260 square meters of wall space, the summary of the philosophy of Epicurus by Diogenes of Oenoanda carved onto a portico wall in the ancient city of Oenoanda in Lycia, Anatolia (now southwest Turkey) is the longest surviving Greek stone inscription. It has also been called "the largest ancient inscription in the world." Less than a third of the original inscription has been recovered, presumably because some of the stones were reused for building material at some point in the past.  The inscription was assigned on epigraphic grounds to the period of the Roman emperior Hadrian. The inscription expounds upon Epicurus's teachings on physics, epistemology, and ethics.