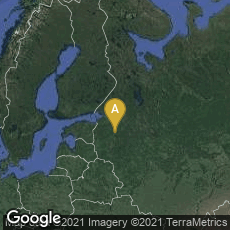 More than 1000 Birch-Bark Documents Have Been Excavated from Mud in Veliky Novgorod, Russia Message and drawing left by a boy on a birch scroll in Old Novgorod language, a precursor to Russian. The scroll was dug from the preservative mud of Veliky Novgorod. (Sergey Ponomarev for The New York Times).

On October 18, 2014 David M. Herszenhorn published an article in The New York Times entitled "Where Mud is Archaeological Gold, Russian History Grew on Trees." The article described and illustrated examples of the over 1000 documents, including many letters, written on birch-bark that were excavated from the mud of the Russian city, Veliky Novgorod or Novgorod in Russia. The city, founded in the late 10th century CE, has been the site of numerous invaluable archaeological finds excavated from mud. The large number of documents, which survived since birch-bark does not decay in mud, provide a window into diverse aspects of society in the region during the Middle Ages.

In October 2014 a Russian website (gramoty.ru) concerning the birch-bark documents was available at this link.