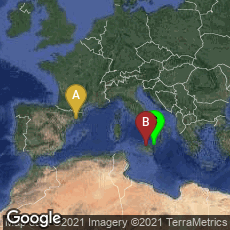 The Plateresque Revival facade of the church built by Francisco de Paula del Villar y Carmona at the Benedictine Monastery of Montserrat.

"Between 1498 and 1500 the great Benedictine monastery of Monserrat in Catalonia commissioned from local printers and from Johan Luschner in Barcelona more than 200,000 indulgence certficates. Only six examples still survive. In 1500 the Bishop of Cefalu in Sicily paid a Messina printer for an order of 130,000 indulgence certificates. All of these have disappeared. Neither of these places was close to the heartland of European print; yet this was the sort of jobbing work that any competent printer could undertake. Of the 2,000 printed single-sheet items surviving from the fifteenth century over one third were letters of indulgence. Ninety per cent of this material was published in Germany. This trade continued unabated into the sixteenth century. So when Luther proposed his theses he was tilting at a part of life that touched the lives of a vast number of Christians. He was also taking on an institution that bought sold profits to the printing industry" (Pettegree, The Book in the Renaissance [2010] 94). [As usual, the links are my additions.]