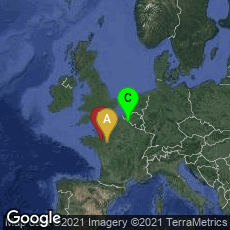 On March 2, 1791 inventor Claude Chappe sent his brother the first transmission over their optical telegraph: “si vous reussissez, vous serez bientôt couvert de gloire” (If you succeed, you will soon bask in glory). The initial experimental line ran between Brulon and Parcé.

Having been appointed Ingénieur-Télégraphiste and charged with establishing a line of stations between Paris and Lille, a distance of 230 kilometres (about 143 miles), Claude Chappe succeeded in completing his first optical telegraph, or semaphore telegraph. The Chappe telegraph was used to carry dispatches for the war between France and Austria, and communicated news of a French capture of Condé-sur-l'Escaut from the Austrians less than an hour after it occurred.

Chappe's system was the first widely adopted system to transmit messages overland faster than a messager or horseback can carry a message over a good road system. That speed had remained essentially fixed since Roman times. The first symbol of a message to Lille would pass through 15 stations in only nine minutes. The speed of the line varied with the weather, but the line to Lille typically transferred 36 symbols, a complete message, in about 32 minutes. Paris to Strasbourg with 50 stations was the next line and soon others followed.

"In the Chappe system messages were encrypted and translated by semaphore signals built on the tops of towers miles apart. A telegrapher in the next tower would read the semaphore signals through a telescope and retransmit the message to the following tower. This process would be repeated, with error-correction checks in place at each repetition, until the message reached the end of the line. Because optical telegraph systems using semaphores required that messages be continually restransmitted from tower to tower, there was no fail-safe way to eliminate error. Furthermore it was necessary to encrypt all messages so that the operators would not be privy to secret information. Thus only the directors of the system and the inspectors were allowed to know the code for message signals. The two operators in each signaling tower knew only the limited set of control codes used for error correction, clock synchronizations, etc. The actual codes were written in codebooks. Claude Chappe's 1795 codebook had 8,940 words and phrases. By 1799 he had added four supplementary codebooks with additional words and phrases, and names of places and people. Thus each message had to include a citation of the code book employed" (Norman, From Gutenberg to the Internet [2005] 174).

"All signals on the semphore telegraph were passed one at a time, in strictly synchronus fashion. The operators were required to check [by telescope] their neighboring stations every few minutes for new signals, and reproduce them as quickly as possible. The operator then had to verify that the next station inline reproduced the signal correctly, and set an error signal if it failed to do so. Each symbol had to be recorded in a logbook, as soon as it was carried to completion. Since no symbolic or numeric code system for representing the semaphore positions was described this was done in the form of little pictograms. . . " (Hotzmann & Pehrson, The Early History of Data Networks [1995] 87).

The Chappe optical telegraph eventually covered France with "a network of 556 stations stretching a total distance of 4,800 kilometres." It was be used for military and national communications until the 1850s.

"By 1824, the Chappe brothers were promoting the semaphore lines for commercial use, especially to transmit the costs of commodities. Napoleon Bonaparte saw the military advantage in being able to transmit information between locations, and carried a portable semaphore with his headquarters. This allowed him to coordinate forces and logistics over longer distances than any other army of his time. However because stations had to be within sight of each other, and because the efficient operation of the network required well trained and disciplined operators, the costs of administration and wages were a continuous source of financial difficulties."