Partly printed and partly autograph letter by printer Andrew Wilson from his Stereotype Office when he shut down his business in 1822.

"Lord Stanhope and Stereotyping". Painting by Robert Thom in the Graphic Communications Through the Ages series preserved in the Cary Graphic Arts Collection, Rochester Institute of Technology. Jeremy Norman Collection of Images -&nbspCreative Commons
Wilson continued to promote the stereotype process, as if it was superior to ordinary printing from type. Here is such a promotion on the title page of his edition of The Spectator. 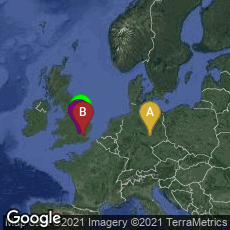 Unusual original binding on one of my copies of Freylinghausen's book.

In spite of the apparent labor-saving advantages of stereotyping, which eliminated the need to reset type when books were reprinted, the process seems to have met with resistance until the Foulis & Tilloch patent was purchased and the method perfected by Charles Mahon, 3rd Earl of Stanhope, inventor of the first completely iron printing press, and promoted under Stanhope's sponsorship by printer Andrew Wilson. In 1804 Wilson produced John Anastasius Freylinghausen's An Abstract of the Whole Doctrine of the Christian Religion. With Observations. From a Manuscript in Her Majesty's Possession. The First Book Stereotyped by the New Process. Wilson's translation of Freylinghausen's book was the first book printed from stereotype plates using the improved Stanhope process. It was also the first book printed on a Stanhope press.

Wilson, who commenced printing using stereotype plates in 1803 under the patronage of Stanhope, was the primary promoter of Stanhope's stereotyping process, issuing pamphlets on the subject in 1806 and 1811. The process was intended to reduce printing costs since type did not have to be reset when books were reprinted; however, it was opposed by some printers on the grounds that the quality of printing from the Stanhope stereotype plates remained inferior to printing from conventionally set type. Therefore, Wilson's edition was intended to reflect the high quality of printing that could be obtained from stereotype plates. Oxford University Press seems to have quickly recognized the economies that could be gained from the stereotype process as they underwrote some of the cost of development of the process and employed Wilson to print Bibles and prayer books in 1805. Wilson's business relationship with Cambridge appears to have been more complicated as on March 11, 1806 he published a 44-page pamphlet entitled Arbitration between the University of Cambridge and Andrew Wilson in which he spelled out the cost savings that Cambridge should realize through the use of his stereotype plates, and that he expected to share in the savings. In the pamphlet Wilson also credited himself with perfecting the stereotype process. By 1809 Wilson or Stanhope licensed Cambridge University Press to use the new stereotype process. Nevertheless, the process was not rapidly adopted by a the printing community. "By 1820 there were twelve printing firms in London that did stereotyping; by 1840 it was the standard printing practice" (Erickson, The Economy of Literary Form: English Literature and the Industrialization of Publishing, 1800-1850 [2000] 27).

Wilson's edition of Freylinghausen, which was sold by T. Cadell and W. Davies in London, was also the first book printed on machine-made paper, the first English patent for which was obtained by John Gamble in 1801. Through a chain of acquaintances, Gamble was introduced to the brothers Sealy and Henry Fourdrinier, stationers of London, who agreed to finance the development of Gamble's version of Robert's papermaking machine. The Fourdriniers brought Bryan Donkin, characterized as "a skilled and ingenious mechanic," into the project, with the result that an improved version of the Robert machine was installed at Frogmore Mill, Apsley, Hertfordshire, in 1803, followed by another in 1804. A third machine was installed at the Fourdriniers' own mill at Two Waters. The Fourdriniers also bought a mill at St Neots, to install two more machines there, and the process and the machines continued to develop. By 1804 the Fourdrinier brothers purchased the paper-making patent from John Gamble. Though there is no statement in Wilson's edition that the paper on which it was printed was made by machine, in 1805 the antiquarian, collector and scholar Richard Gough wrote an anonymous review of the book in The Gentleman's Magazine 75 (1805) 250 in which he stated:

"The paper is the first specimen made by what is termed the machine, in which the sheets are extended to any dimensions at pleasure. Its texture is solid and even throughout, its colour good, and by a certain roughness on its surface, in which it resembles copper-plate paper, it is adapted to take the imprint advantageously."

In January 2015 I was pleased to obtain a copy of the first edition of this work for my collection. It was in a very unusual contemporary binding consisting of a red morocco spine and brown calf covers. On the spine was stamped below the title the word Stereotype, which suggests to me that it may be an original publisher's binding. The relatively heavy wove paper on which the book was printed is of uneven quality, with some gatherings heavily and unevenly browned while other gatherings are almost completely clean. One might expect uneven quality in a work printed on paper that must have been experimental at the time. The work was clearly intended as an advertisement for Stanhope's stereotype process, as facing the title were printed "Standing Rules of The Stereotype Office," which read as follows:

"1. Nothing is to be printed against Religion.

"2. Every thing is to be avoided, upon the subject of Politics, which is offensive to any Party.

"3. The Characters of Individuals are not to be attacked.

"4. Every Work which is stereotyped at this Office, is to be composed with beautiful types.

"5. All the Stereotype Plates are to made according to the improved Process discovered by EARL STANHOPE.

"6. School Books, and all Works for the Instruction of Youth, will be stereotyped at a lower Price than any other."

Remarkedly, by August 2017 I obtained two more copies of Freylinghausen's book. The second copy, in contemporary calf, had been rebacked and appeared to have had its paper washed, so the color of the gatherings was even throughout. The third copy was in a contemporary calf binding, and the uneven nature of the gatherings compared almost exactly to the first copy, though the period bindings were different, with the binding on the third copy entirely in calf, unlike the first copy which had a contemporary morocco spine.

Freylinghausen (1670-1730) studied theology at the Universities of Jena and Halle, and became minister of St. Ulrich"s Church and inspector of the Public School at Halle. He also wrote and composed forty-four hymns. Lowndes, Bibliographer's Manual of English Literature II, (1865) 841 states that "the translator was Queen Charlotte, consort of George III, and the editor of the volume was Beilby Porteus, Bishop of London. The Rev. Philip Bliss states that he had seen the original MS. in Her Majesty's handwriting."

Thanks to John Bidwell for pointing out to me in emails in January 2015 that Wilson's edition of Freylinghausen's book was the first book printed on machine-made paper, and for supplying the quote from Richard Gough's 1805 review confirming this.

"It is possible, however, that the Freylinghausen is antedated by a pamphlet, Translation of a Report Made to the Philotechnical Society of Paris Respecting Julius Griffiths, an English Traveller, by Joseph Lavallée (London, Stereotyped and Printed by A. Wilson, 1804). . . . Another copy of the pamphlet, in the Library of the Literary and Philosophical Society, Newcastle (described by R.A. Peddie in the Newcastle Weekly Chronicle, 21 November 1896), was inscribed by the dedicatee, the Earl of Buchan: 'N.B.-This was the first work steterotyped according to the process of Lord Stanhope, the first book printed at a Stanhope Press, and the first book printed on machine-made paper.' The last claim, at least, may well be true, for the Fourdriniers had at least one experimental mill for machine papermaking at this time (D.C. Colman, The British Paper Industry, 1495-1860 (Oxford, 1959, pp. 181-2)."

Book History from 1798 to 1899
Printing by Handpress or by Hand
Religious Texts / Religion
Book Production in the Industrial Revolution: Origins of Mass Media
Papermaking by Machine

The Gough Map: The Oldest Surviving Road Map of Great Britain and the First Map to Depict a Recognizably Accurate Picture of Britain's Coastline
The Bedford Hours and its History