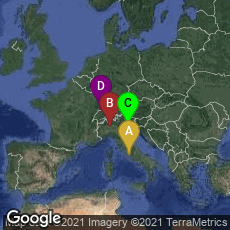 "Early 16th-century manuscript in mensural notation, containing a Kyrie by J. Barbireau. Manuscript page with the five-voice "Kyrie" of the Missa Virgo Parens Christi by Jacques Barbireau (ca.1420-1491). Early 16th century manuscript (Capp. Sist. 160 fols. 2 verso-3 recto music25 NB.06), now held in the Vatican, probably produced at the court of Margaret of Austria in Flanders, dedicated as a gift to Pope Leo X (whose coat of arms is pictured in the middle of the right-hand page.)"

"By the end of the fifteenth century five different kinds of music notation had been cut into type. So far as we know, they first appeared in the books listed below:

"A sixth notation, tablature, would be added by Octaviano Petrucci in the first decade of the sixteenth century" (Duggan, Italian Music Incunabula. Printers and Type [1992] 14).