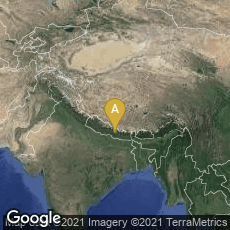 "The leaves of the Borassus (Palmyra) palm were used as writing materials across South and Southeast Asia from at least the fifth century CE until the nineteenth century. The leaves are dried and trimmed then threaded onto strings and protected by wooden covers. A note at the end of this manuscript tells us that it was written on Thursday 31 March 1015 by a scribe named Sujātabhadra in a Nepalese monastery called Hlāṃ. It contains a Buddhist text written in Sanskrit on the Perfection of Wisdom and includes numerous painted miniatures illustrating the Buddha, Bodhisattvas and other divinities." Cambridge University Library, Lines of Thought Exhibition. (MS Add.1643).

In March 1015 the scribe Sujātabhadra, working in or around Kathmandu, Nepal, wrote a manuscript in Sanskrit known as the Perfection of Wisdom in Eight-Thousand Stanzas (Skt. Aṣṭasahāsrikā Prajñāparamitā). Sujātabhadra wrote the manuscript on 222 palm-leaf folios. It is one of the earliest surviving illuminated Buddhist manuscripts. The manuscript is preserved in Cambridge University Library (MS Add. 1643), and in 2015 the library made a digital facsimile of the manuscript available at this link.

"The text is lavishly illustrated by a total of 85 miniature paintings: each one is an exquisite representation of Buddhas and Bodhisattvas (beings who resolve to achieve Buddhahood in order to help other sentient beings) – including the historical Buddha Śākyamuni and Maitreya, the Buddha of the Future. The figures represented in the miniatures include also the embodied Perfection of Wisdom goddess (Prajñāparamitā) herself on the Vulture Peak Mountain near Rājagṛha, the capital of the ancient kingdom of Māgadha, in today’s Bihar state. The settings in which these deities are depicted are drawn in meticulous detail. The Bodhisattva Lokanātha, surrounded by White and Green Tārās, is shown in front of the Svayambhu stupa in Kathmandu – a shrine sacred for Nepalese and Tibetan Buddhists, damaged in the recent earthquake. The places depicted in the miniatures represent a kind of map of Buddhist lands and sacred sites, from Sri Lanka to Indonesia and from South India to China" (http://www.cam.ac.uk/research/features/the-1000-year-old-manuscript-and-the-stories-it-tells#sthash.LKfGWelI.dpuf).