Koenig did a test run on the July 3, 1824 issue of the Allgemeine Zeitung, making this the first publication printed in Germany by the first printing machine built in Germany. An article on the Koenig & Bauer's Schnellpresse appeared in the August 21, 1825 issue. This was probably the first detailed article on mechanized printing published in Germany. For the July 12, 1824 edition of the Allgemeine Zeitung Koenig was able to print 3000 copies on his Schnellpresse, but the steam engine failed so the machine had to be powered by hand. 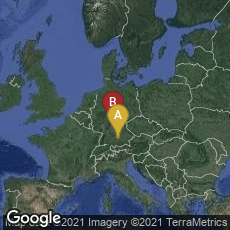 Koenig & Bauer Move Back to Germany; 7 Years Later Print the "Allgemeine Zeitung", the First Examples of Machine Printing in Germany Portraits of Koenig and Bauer.

In 1817 Friedrich Koenig and his partner Andreas Bauer left England because of financial disputes with their English partners, and founded the company known today as Koenig & Bauer. They set up a new printing machine factory at an abandoned monastery at Oberzell near Würzburg. However, in Germany development of their printing machines proceeded slowly, as this was at least 25 years before the beginning of the machine age in Germany. In the 1860's there were attempts in Germany at imitating the industrialization that had taken place elsewhere in Europe. This imitation was only moderately successful. Only in 1871 when  the modern German nation was created by Otto von Bismarck were major industries founded that led to the full fledged industrialization of Germany.

The first newspaper to mechanize its printing was Johann Friedrich Cotta's Allgemeine Zeitung in Augsburg. On July 3, 1824 Koenig did a test printing of the Allgemeine Zeitung. This was the first commercial application of a Koenig Schnellpresse in Germany. Nine days later, for the July 12, 1824 edition Koenig was able to print 3000 copies of the newspaper using his Schnellpresse. However, the steam engine failed and the press had to be driven by hand. With this awkward beginning Koenig introduced high speed printing to Germany roughly ten years after he introduced it in England.

An article describing the history and development of Koenig's Schnellpresse appeared in the Allgemeine Zeitung for August 21, 1825. An additional article appeared in the February 3, 1827 issue.

Friedrich Koenig Invents the Steam-Powered Platen Press
William Clowes Introduces High Speed Printing in Large Scale Book Production
The Earliest French and German Accounts of the Rotary or Machine Press
The First Published Image of a Railroad & Child Labor in Factories in a Luxurious Book on Costumes
Probably the First Book to Indicate that it Was Printed by a Steam-Powered Press
John Walter Defends the New Printing Machine Against Threats from Pressmen
Inventor of the Steam-Powered Press Friedrich Koenig Recounts the Early History of its Development
The London Printing Machine Managers' Trade Society is Founded
Was the First Cylinder Press Built in the United States?