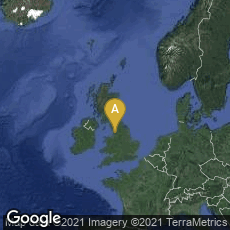 Until 1871 trade unions were technically illegal in England, and until 1875 it was illegal for an English trade union to strike. Penalties for breaking the law included imprisonment, though it is unclear to what extent the penalties were always enforced. The full force of the inability to form strong and effective trade unions was felt nowhere more powerfully than by workers in the Lancashire cotton mills of Preston, where a century earlier Richard Arkwright invented the water frame. Periodically workers in the textile mills were either unemployed or forced to accept a cut in pay that they could not afford. In 1869 W. Arey, President of the Preston Amalgamated Trades Council, T. Banks, Secretary of the Spinners' Association, and J. Edmundson, Secretary of the Power-Loom Weavers' Association published a broadside headed An Appeal from the Cotton Operatives of Preston. Ten Per Cent Reduction of Wages.  This appeal was directed to workers in other trades or to those in the mills outside of Preston for financial support in order to survive their current walk-out or lock-out.

The broadside reads as follows:

"Preston, as of old, is once more the selected battle-ground for a struggle on the wages question, and its operatives are again called upon to make sacrifices such as will take many years of prosperity to redeem.

"About the year 1822, a lock-out of Spinners took place in Preston, when some were imprisoned, and many hardships were suffered, through the want of proper organisation at home and throughout the country. The object of the masters was the extermination of the very name of Union from amongst the operatives of the town. A large number were victimised and had to leave the town and wander through other districts in search of the employment denied them in their native place— in fact they were 'outlawed'. In 1836 another lock-out took place, because the factory workers made an attempt to raise their list of prices to the level of other districts. This struggle lasted about eighteen weeks, and in the end the operatives gave way, through want of support, but resumeed work at an advance of ten per cent, —which, however, was very shortly taken off again. On this occasion, also, a large number were victimised, some imprisoned, and many whose names figured in the masters' 'black books' were kept out of employment over three years; some of these left the town never to return.

"Still the spirit of Union was not crushed out of the men of Preston; and their associations managed to keep in existence, though three reductions took place from 1840 to 1842. The panic of 1847 brough with it a further reduction of ten per cent., with a promise from the employers that, when trade revived, ti should be given back. In the latter part of 1748, the trade did revive, and the operatives memorialised their employers for an advance of wages, reminding them of the promise made in 1847. The answer to this application was that they were too soon. In 1849, the appeal for an an advance was renewed, but with no better success, for the operatives were then told that the 'good time' had gone by, and they were too late. At last, by determination and perseverance, the factory workers obtained an advance of ten per cent, in 1853, but only retained it amonth. The great lock-out then took place, which lasted nine months, the history and results of which are known throughout the kingdom.

"In the year 1859, the factory workers obtained a recognised list of prices, conferring an advance of 7 1/2 per cent. Still the prices were considerably below those paid in other towns, and did not consequently give satisfaction. The motto, however was 'Never say fail', and at last— after many years' struggles, contentions, and disappointments, Preston obtained, in 1860-66, a list of prices equal to those paid throughout East Lancashire, and which gave a considerable advance to the Spinning and Weaving departments of factory labour. This advance, however, has not been proportionately extended to the Testers and Drawers and Cardroom hands, who have been and still are, with few exceptions, paid something like twenty per cent lower than in neighbouring towns. It was, at this time, arranged between the employers' committeee and that of the operatives, that the wages should rise and fall with those of East Lancashire. In January, 1867, Blackburn and all East Lancashire were reduced five per cent; Preston being reduced the same amount, almost in the same week, in accordinance with the agreement of 1866. The Weavers obtained two advances of five per cent in 1866, making ten per cent above the Standard List. One of these advances they still retain, but have expressed their willingness to sacrifice it to meet the present depression.

"The year 1868 was characterised, in the first four months, by large speculations in cotton on the part of cotton spinners, and the result was that 4d. per pound was added to the price of cotton, while only 2d. per pound was gained in the price of yarns to meet this suicidal speculation. Very shortly after this, mills began to be closed, and others put on short time— many firms not working mroe than two or three days per week; whilst a further curtailment was indirectly suffered, in every department, through waiting for work; thus bringing down the wages of the operatives to starvation point. There are cases not a few where wages were so small that the parish had to supplement them, in order to keep families from utter destitution. During the last seven or eight months, the factory operatives in every department have suffered greatly— their wages, throughout the branches, not averaging ten shillings per week. By the stoppage of mills, a vast number of operatives have been thrown into the streets, and for a time have subsisted upon the allowance from their associations. But even this must have an end; and the only resource has been the paltry pittance doled out by the parish.

"In the midst of all this wretchedness and distress, the master cotton spinners and manufacturers of Preston, apparently believing that the spirit of reistance is entirely crushed out of the operatives, now propose and insist upon a reduction of ten per cent. One employer, Mr. George Smith, of Moor Brook Mill, after a stoppage of twelve weeks, recently opened his mill at a reduction of Fifteen per cent. His own hands refusing to work upon such terms, Mr.Smith applied to the Board of Guardians for hands, and this resulted in the exclusion of all factory workers from the parish books, with the intimation that plenty of 'good work' might be had at Mr. George Smith's. To prevent the acceptance of employment upon such conditions, the societies paid these hands the same amount as they had received from the parish. This prompt action on the part of the operatives' associations entirely checked, in the first instance, the proposed reduction; although, from the influx of nondescript parish labourers, and the threatened spread of the reduction, the contest, as regarded Mr. Smith's mill, was to some extent abandoned. Shortly after this, another employer, Mr. Sellers, offered a reduction of ten percent, and all the hands were brought out on strike; as it was felt that if a reduction was submitted to at two mills in the town, all the rest would very soon follow—a conclusion which has been fully borne out by the fact that, in one week after the proposition of Mr. Sellers, a general reduction of ten per cent was proposed by the masters of Preston, with the exception of about six firms. Many of the employers only gave one week's notice, which expired on Wednesday and Thursday, March 17th and 18th.

"It has been proposed by the operatives that the question of the present reduction should be submitted to arbitration, and many points would have been conceded to secure the adoption of that mode of settlement. That course has been declined by the employers; and this, we think, is an evidence their their side of the argument will not bear the investigation of impartial judges.

"Being deeply convinced of the important issues at stake in the present struggle between capital and labour, not only as regards the cotton operatives of Preston, but the adequate remuneration of labour and the power of Union amongst us generally; and feeling that we shall be unable of ourselves to support the four thousand hands now out on strike— a number probably to quadrupled on the expiration of the whole of the notices— we earnestly appeal to our fellow-workers in every trade to render their best pecuniary assitance and support in this our urgent necessity. We make this appeal in the full assurance that, —as we, the operatives of Preston, have always done our best in answer to appeals from our suffering breathren in every quarter, —their kindly hands will now be reached forth to help us in our struggle; which will not only be alleviated, but we hope shortened and brought to a successful close, by the powerful action of generous and extended union."